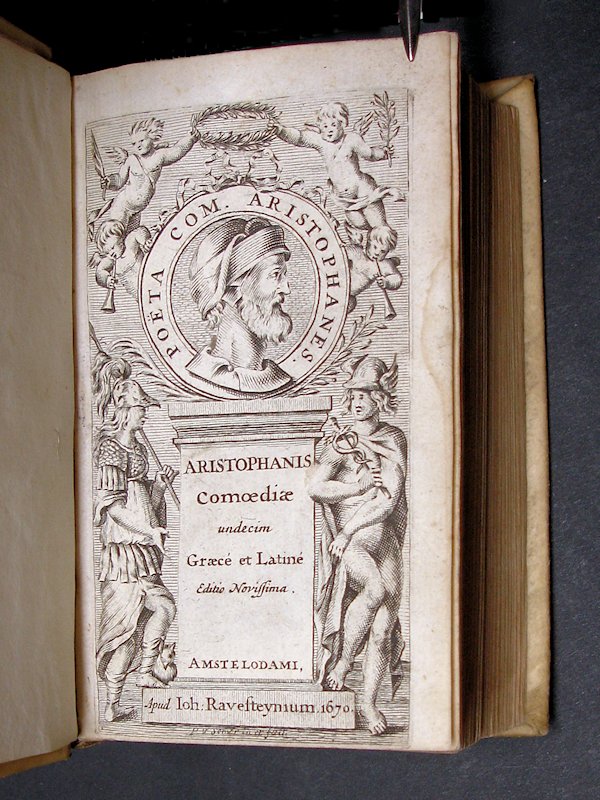 ARISTOPHANES. ARISTOPHANOUS KÔMÔiDIAI ia'. Comoediae undecim, graecè & latinè, ut et Fragmenta earum quae amissae sunt. Cum emendationibus virorum doctorum, praecipue Josephi Scaligeri, cum indice Paroemiarum selectiorum. Accesserunt huic editioni notae & observationes ex variis autoribus collectae, ut et nova versio EKKLÊSIAZOUSÔN à Tan. Fabro facta cum doctissimis ejusdem in eandem comoediam notis. Amsterdam (Amstelaedami), Apud Joannem Ravesteinium, 1670. 12mo. 2 parts in 1: (XXIV),1087 (recte 1089),(3 blank),60 p. Vellum. 13.8 cm (Ref: Smitskamp, the Scaliger collection, no. 6; Hoffmann 1,255; Hoffmann 1,255; Dibdin, 1,299; Moss 1,94; Ebert 1091; Graesse 1,207; Brunet 1,453) (Details: 5 thongs laced through the joints. Woodcut printer's mark on the title, depicting the prophet Elijah resting against a tree and being fed by the ravens. This scene is described in the Old Testament in book 1 Kings, chapter 17, vss. 1-4, where the Septuagint speaks of 'korakes', ravens that feed Elijah. This is of course an allusion to the printer's name Ravestein. The entrepreneur's motto is 'Exspectando', 'in expectancy'. The title is preceded by an engraved title/frontispiece, designed by P.van Somer. On it a round portrait of Aristophanes on a pedestal, which is flanked by Pallas Athena and Hermes. Greek text with facing Latin translation. The last 60 pages have their own half title: 'Aristophanis Fragmenta a G. Cantero iam pridem collecta; cum praefatione V.C. Andreae Schotti; recognita vero plurimum et non parva accessione loculpletata a G. Goddaeo') (Condition: Vellum age-tanned. Lower margin of the frontispiece and the title slightly cut short. Paper slightly yellowing) (Note: Of the Greek comic playwright Aristophanes, ca. 455-385 BC, born in the radical democracy of Athens, survive 11 plays. In a less free society his genre became obsolete in his own time, and was later replaced by the harmless plays of Menander. 'Aristophanes' comic mode- a dramatic free form with an almost improvisational feel, great poetic and linguistic inventiveness, highly topical satire (public figures being named and personated on stage), and obscenity, beyond almost any subsequent standard of acceptability'- never agian became a major theatrical tradition'. (The classical tradition, Cambridge Mass., 2010, p. 69) This opinion seems outdated. Aristophanes sounds very much like modern satyric comedy. He seems to be the creator of his own genre. The 2nd edition of the OCD, 40 years older, sound more sympathetic. 'He had a keen eye and ear for the absurd, and the pompous; his favoured media are parody, satire, and exaggeration to the point of phantasy, and his favourite targets are men prominent in politics, contemporary poets, musicians, scientists and philosophers, and (...) for a wide public'. (OCD 2nd ed. p. 113) That is more like it. His plays are not books, but are more like libretti for stage performances. 'Every comedy is indeed a 'libretto' or rather a work of thought designed for theatrical performance'. (C.F. Russo. 'Aristophanes an author for the stage', London/New York, 1994, p. XI) Serious scholarly work on the text of Aristophanes begins in the 16th century, with Petrus Victorius, J.J. Scaliger and his friend Willem Canter. An new edition with Scaliger's notes was published posthumously in 1624 by Maire in Leiden. That Scaliger, a man with a sharp tongue, and who had loads of ennemies, was an admirer of the comic playwright is no wonder. The following epigram can be read in the introduction to Scaliger's text of 1624: 'Ut templum Charites quod non labatur, haberent,/ invenere tuum pectus Aristophanes'. (The Graces have found for themselves a temple that would not fall down, your breast, Aristophanes') This 1670 edition is compiled chiefly from the earlier edition of 1624, and contains also notes on the 'Ecclesiazusae' by the French scholar Tanaquil Faber, 1615-1672) (Collation: *8, A-2E12, 2F6 (leaf 2F6 verso blank), 2G6, 2H-2Z12, 3A6 (leaf 3A5 verso blank, leaf 3A6 blank), A-B12, C6) (Photographs on request)
Book number: 120016 Euro 420.00