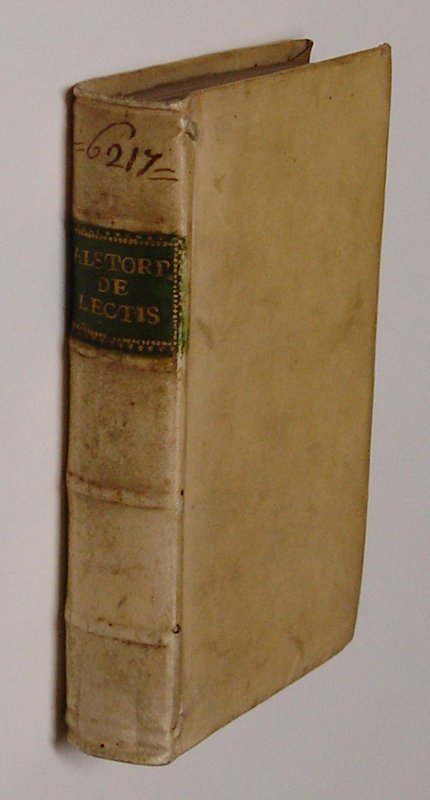 ALSTORPHIUS,J. Joannis Alstorphii J.U.D. Dissertatio philologica De lectis. Subjicitur ejusdem De lecticis veterum diatribe. Amsterdam (Amstelaedami), Apud Joannem Wolters, 1704. 12mo. (XX),(4 blank),334,(2 blank),(22)(2 blank) p., 16 plates, most folding, 1 text engraving. Vellum. 14 cm (Ref: Brunet 6,29001; Welcome 2,37) (Details: Back with 4 raised bands, and a green morocco shield; 2 thongs laced through the joints; title in red & black; engraved printer's mark on the title, depicting a burning candle, the motto is 'aliis inserviendo cunsumor') (Condition: Waterstain in the margin of the first and last 2 leaves of the first gathering; 2 very small and hardly objectionable wormholes right on the front joint, not affecting any other part of the book. Small stamp of a coat of arms on verso of the title) (Note: The first large scale investigation on the subject of beds and litters of the Greeks and Romans. The 'lectus' or in Greek 'klinê' was in antiquity a piece of furniture, for sitting, resting, sleeping and also for banqueting. It often decorated the rooms of the wealthy for posh parties. Johan Alstorph, the author of this book, was born ca. 1680 in Groningen, studied in Harderwijk, and died in 1719, (Pökel p. 8). He defended his dissertatio de lectis in 1700, and his diatribe de lecticis in 1701 'sub praesidio (...) D. Theodori Jansoni ab Almeloveen', professor Greek and medicine at the University of Harderwijk, 1697-1712, best known for his editions of Hippocrates, Coelius Aurelianus and Strabo. The dissertation was enlarged and revised by Alstorph for this publication of 1704 after the return to his hometown Groningen. We suppose that Van Almeloveen acted as middleman for this edition, for the publisher Wolters was a relative of his mother. To thank him Alstorph send Wolters a barrel of Groningen beer. Alstorph states in his 'dissertatio' that it is the first large scale investigation on the subject of beds and litters of the Greeks and Romans, and the customs related to them. The plates depict reclining chairs/seats, a cradle, a sickbed, deathbed, and different chairs; there is even an engraving of the Last Supper, with the apostles lying relaxed left and right of Christ on reclining seats. In 1701 Alstorph was promoted 'Juris Utriusque Doctor'. Alstorph's work on lances and spears, 'de hastis veterum opus posthumum, nunc primum in lucem editum cum multis tabularum aenearum iconibus' was posthumously published in 1757) (Provenance: The small shield on the verso of the title shows 3 oblique bars, with 3, 2, and 1 star in the compartments) (Collation: *12 (leaf *11 & *12 blank); A-P12 (leaf O12 & P12 blank) (Photographs on request)
Book number: 120023 Euro 260.00