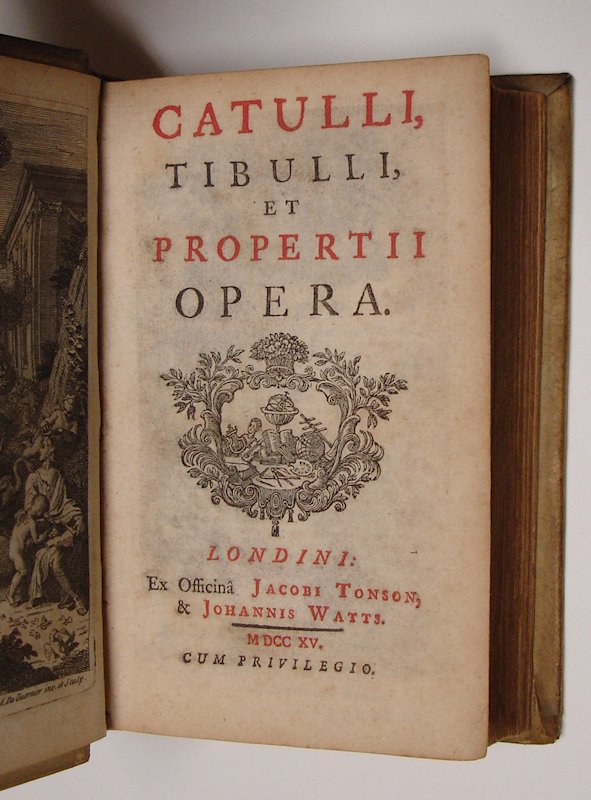 CATULLUS, TIBULLUS, PROPERTIUS. Catulli, Tibulli et Propertii Opera. London (Londini), Ex Officina Jacobi Tonson & Johannis Watts, 1715. 12mo. (XXXII),243,(353),(3 blank) p., frontispiece. Vellum. 15 cm (Ref: ESTC T145213; Schweiger 2,82: 'Von M. Maittaire besorgt. Der Text is nach der Cantabr.1702 abgedruckt und eine Auswahl von Varr. ders. beigefügt'; cf. Dibdin 1,377 on the 1702 ed. 'a splendid and accurate edition'; Moss 1,263; Ebert 3768; Graesse 2,87) (Details: Frontispiece by the French artist Louis du Guernier, who made illustrations for the so-called series of Maittaire Classics of Tonson. (See the note) The frontispiece depicts a bucolic scene with the three poets in the foreground, busy writing their poetry; in the centre a thronelike carriage pulled by two swans, and in the carriage Venus and Amor. Title printed in red & black. Woodcut printer's mark on the title, showing several kinds of instruments within a floral framework. After the title the 'privilegium', dated 1713, with the woodcut coat of arms Queen Anne Stuart (1665-1714). Woodcut headpieces. At the end the Greek translations of several poems by Joseph Scaliger and Florens Christianus. The second part, more than 350 pages, consists of indices) (Condition: Vellum soiled. Some faint offsetting of the frontispiece on the title. Slightly foxed. Paper yellowing, some gatherings are browning. Occasional small ink annotations) (Note: This triumvirate of Latin erotic poets was already united in one edition in 1472, published in Venice by Vindelinus de Spira. Editions of the three poets united remained immensely popular through the ages. This collection of 1715 was produced by the classical scholar of great reputation Michael Maittaire, 1668-1747. He was of French Huguenot descent and spent most of his life in England. There he ran a private school, and acted as Latin tutor. Maittaire produced for Tonson a successful series of classical works known as Mattaire Classics. It was sold in uniform duodecimo volumes, which contained long and thorough indexes, for instance Terence, Justin, Phaedrus, Lucretius, Aesopus, Sallust, Catullus, Ovid, Horace etc. The paper used was of mediocre quality. The series was concluded in 1719 with an edition of Lucan. Many of them became standard editions. (See for a quick glance of him Wikipedia) (Provenance: Frisian provenance. Inscription on the front flyleaf: 'Amico Jacobo van Leeuwen donat lepidum hunc libellum D.H. Beucker Andreae, 5/8 1814'. This charming book was donated to Jacobus van Leeuwen by Daniël Hermannus Beucker Andreae. D.H. Beucker Andreae, born in 1772, was of Frisian descent. He was educated by his mother, his favourites were Greek and Latin, and Mathematics. He went to Franeker to study law, classical philology, mathematics and philosophy, where he took his doctoral degree in law in 1795. In 1811 he became magistrate in Leeuwarden, and in 1812 Clerk of the Court. He was also involved in the local politics of Leeuwarden. In 1825 he acted as chairman of the committee for the support of the revolutionary Greek, and in 1827 he was one of the founders of the 'Friesch Genootschap ter beoefening der Friesche Taal, geschiedenis en oudheidkunde'. He died in Leeuwarden in 1828. (NNBW 1,135/36. More on the site of DBNL) This book became the property of Jacob van Leeuwen, born in 1787 in Nieuwkoop. After the 'schola latina' at Hoorn he went to the 'Remonstrantsch Seminarie' in Amsterdam to study theology. In the aftermath of the French occupation of the Netherlands however he could not finish his studies, and went to Friesland in 1811 as a private teacher. In 1813 he was appointed clerk at the court of law in Leeuwarden. In 1827 he was one of the founders of the 'Friesch Genootschap ter beoefening der Friesche Taal, geschiedenis en oudheidkunde', of which society he was an active member, committee member and chairman till his death in 1857. These two men were colleagues and shared the same interest in Frisian culture, history and language) (Collation: *12, a4, B-2C12 (leaf 2C11 verso & 2C12 blank) (Photographs on request)
Book number: 120026 Euro 160,00