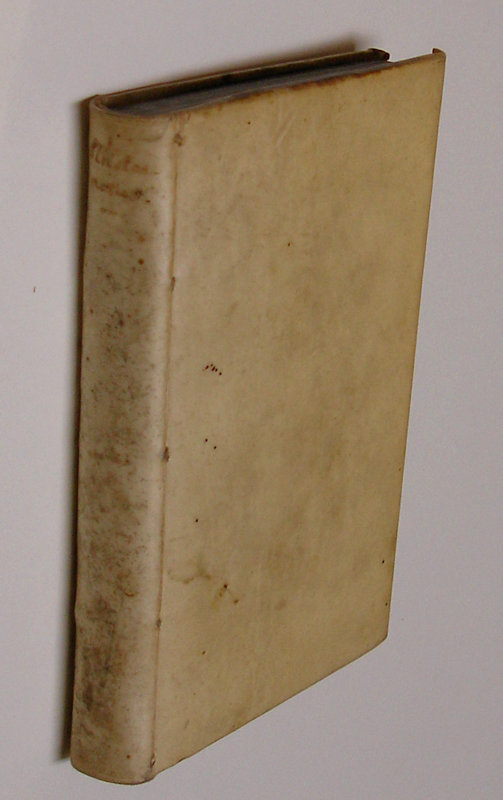 ARISTAENETUS. Aristaeneti Epistolae graecae cum versione latina et notis Josiae Merceri curante Joan. Cornelio de Pauw, cujus notae accedunt. Utrecht (Trajecti ad Rhenum), Apud Hermannum Besseling, 1737. 4to. (XXIV),287,(1 colophon) p. Overlapping vellum 15.5 cm (Ref: Hoffmann 1,240; Schweiger 1,44; Dibdin 1,292; Fabricius, Bibliotheca Graeca, ed. 4a, Hamburg 1780, p. 696; Brunet 1,448; Ebert 1066; Graesse 1,204) (Details: 5 thongs laced through the joints. Title printed in red and black. Woodcut ornament on the title. Greek text with facing Latin translation, commentary on the lower half of the page. Edges dyed blue) (Condition: Vellum slightly soiled. Stamp and name on the front flyleaf. Small part of the right lower corner of the front flyleaf cut off, and renewed. Small shelf number in red ink on the title. Two stamps on the verso of the title) (Note: A survey of erotic motives in the literature of Greece and Rome. Aristaenetus is the established name of the author of a collection of love letters in two books, probably from the beginning of the 6th century AD. It survives only in one Codex, of which the first folio with the name of the real author is lacking. Aristaenetus (Bestpraiseworthy) is only applied to the sender of the first letter. This is clearly a case of an imaginary letter-writer. The sources used are Plato, Menander, Lucianus, Alciphron, Philostratus , the ancient novels, and love elegies of Callimachus. Aristaenetus draws however in a conventional way a veil over too explicit love-making. The collection is a kind of survey of erotic motives in the literature of Greece and Rome. Everyting erotic however is covered with a veil of prudery. Aristaenetus ends after some cuddling before the bedroom is entered. (Neue Pauly, 1,1087) The collection was allready attributed to Aristaenetus in the 'editio princeps' of Antwerp 1566, edited by J. Sambucus. An edition with a Latin translation was published in 1595 in Paris by Iosias Mercier, the 4th edition of which dates from 1639. Mercier was the first to observe that the first letter of the collection was imagined to have been written by one Aristaenetus, and that the collection belonged to the genre of imaginative epistolography. Aristaenetus had to wait almost a century for the next edition, which appeared in 1736 in Utrecht, produced by Jacobus van Lanckom. Exactly the same edition was brought on the market by the Utrecht publisher Hermannus Besseling, only the impressum on the title differs, the rest is exactly the same. It was said that Aristaenetus was put to sleep in the commentary of Pauw. A revised edition was published in Zwolle in 1749. Cornelis de Pauw, born ca. 1680 in Utrecht, was canon of the 'Sint Jan'. He was a classical scholar of some repute, and published several editions of Greek and Roman authors, Hephaestion, Horapollo, Anacreon, Quintus Smyrnaeus, Theophrastus's Characters, Phrynichus, Aeschylus. By some detractors he was considered to be an 'homme médiocrement savant', whose ignorance was only exceeded by his impudence. He died in 1749) (Provenance: On the front flyleaf a stamp: 'Prof.Dr. Joh. Irmscher, Berlin NO 55, Erich-Weinert-Strasse 126'. Johannes Irmscher, born in Dresden 1920, was a classical philologist and byzantine scholar, who made his carreer in the DDR. He died in 2000. On the same flyleaf also in ink: 'C. Schoenemannus, Isleb. 1782'. This book once belonged to the German classical scholar and geographer Karl Traugott Gottlob Schoenemann, born in Eisleben in 1765. He studied classical philology and ancient geography in Göttingen. In 1787 and 1788 he published the treatises 'De geographia Homeri' and 'De geographia Argonautarum' . He died prematurely in 1802. Posterity is still thankful for his 'Bibliotheca historico-litteraria patrum latinorum a Tertulliano usque ad Gregorium M. et Isidorum Hispalensem' (1792/94), a still indespensable work of reference for early Christian Latin literature, from Tertullian to Isidor of Sevilla. On the title in red ink: 'Ph.H. 85'. On the verso of the title a round stamp of: 'Biblioth. Gymn. Ill. Gothana'. This stamps dates from before 1859. In that year the local 'Gymnasium Illustre' and the 'Herzogliches Realgymnasium' were transformed into the 'Gymnasium Ernestinum Gotha'. (See Wikipedia 'Ernestinum Gotha') (Collation: *8, 2*4, A-S4) (Photographs on request)
Book number: 120031 Euro 225.00