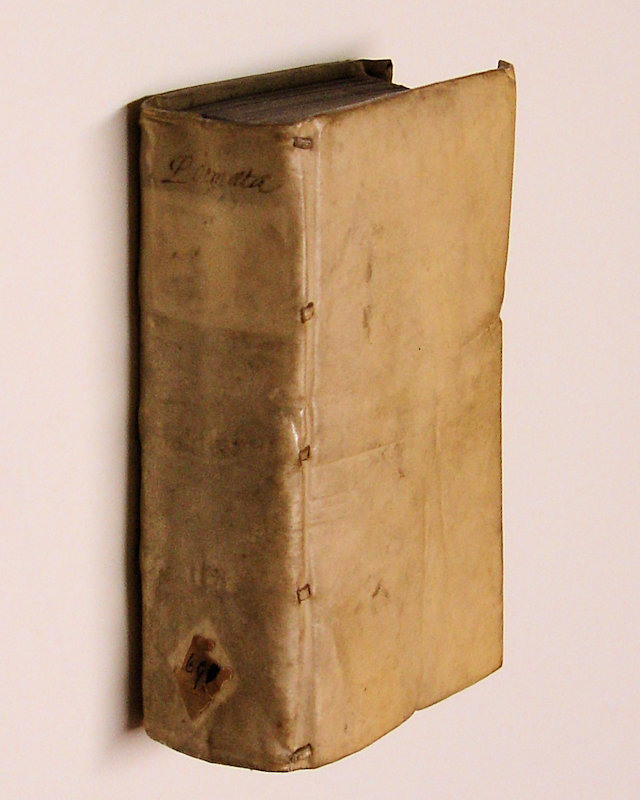 BARLAEUS, CASPER. Casparis Barlaei Antverpiani Poematum pars II: Elegiarum et Miscellaneorum carminum. Amsterdam (Amstelodami), Apud Joannem Blaeu, 1646. 12mo. (VIII),576 p. Overlapping vellum 13 cm (Details: 5 thongs laced through the joints. Woodcut printer's mark on the title, depicting a celestial sphere flanked by Tempus and Hercules, motto: 'Indefessus agendo'. This is the second volume of a two volume set. The first volume was published in 1645 by Blaeu, simply as 'Poemata') (Condition: Vellum age-toned. Old name on the title. Faint waterstain in the upper and lower margin of most quires.) (Note: When he was one year old the Flemish parents of the Dutch polymath, poet, theologian and historian Caspar Barlaeus, 1584-1648, had to flee Antwerp for the 'Spanish fury'. 'They settled in Zaltbommel, where his father eventually would become head of the Latin school. Caspar studied theology and philosophy at the University of Leiden. After his study, he preached for 1.5 years in the village of Nieuwe-Tonge, before returning to Leiden in 1612 as an under-regent of a college. From 1617 he also was professor in philosophy at the university. Because of his remonstrant sympathies, he was forced out of this job in 1619. He then studied and graduated in medicines (in Caen), but never practiced professionally. (...) From 1631, he was professor of philosophy and rhetoric at the Amsterdam Athenaeum, Athenaeum Illustre), which is commonly regarded as the predecessor of the University of Amsterdam. (..) Barlaeus published many volumes of poetry, particularly Latin poetry. He also wrote the eulogy that accompanies the 1622 portrait of cartographer Willem Blaeu', the father of Johannes Blaeu, the publisher of this fourth enlarged edition of 1645-1646. (Source Wikipedia English)) (Provenance: From the library of Andrew Fletcher of Saltoun, 1653-1716, a Scottish author and politician. He was leading the opposition against the 1707 Act of Union between Scotland and England. He also was an passionate book collector) (Collation: *4, a-z12, (h3 = k3), 2a-2b6, chi4) )Photographs on request)
Book number: 120033 Euro 200,00