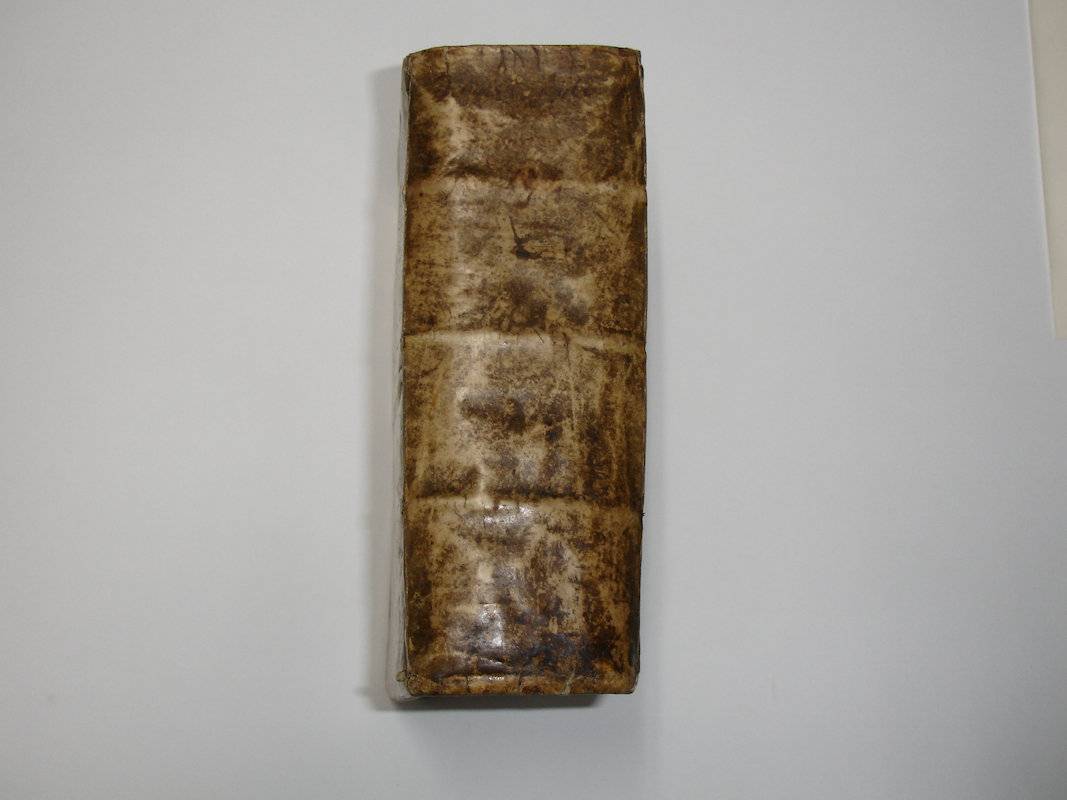 CASSIUS DIO. Dionis Casii Cocceiani Historiae Romanae libri XLVI, partim integri, partim mutili, partim excerpti. Io. Leunclavii studio tam aucti quam expoliti. Fragmenta priorum XXXIV amissorum, & posteriorum XX librorum. Notae Leunclavii, quibus Dionia plurima restituuntur. Adiectus index copiosissimus. Frankfurt (Francofurti), Apud Andreae Wecheli heredes, Claudium Marnium & Ioan. Aubrium, 1592. 8vo. (XVI),1101,(1),(105 index),(1 printer's mark) p., 1 folding table. Vellum 18 cm (Ref: VD16 D 1794; Hoffmann 1,551; Dibdin 505/06; Graesse 2,393/94) (Details: 5 thongs laced through the joints. Wechel's woodcut printer's mark on the title and the last page, depicting the winged horse Pegasus gracefully arched over a caduceus and 2 intertwined cornucopiae. Inserted is a folding table with a genealogical tree of the Iulii, from Caesar to Nero. This book contains a Latin translation of the extant books (libri 36/60, covering the years 68 B.C - 47 A.D.) of Dio Cassius' Roman History, supplemented with the books 61/80 (till 229 A.D.), epitomized by the Byzantine historians Johannes Xiphilinus and Zonaras. After this translation follow fragments of the 'Historia Romana', in Greek, accompanied by a facing Latin translation, followed by the Greek text only of the fragments of the first 20 books. At the end of this work 99 pages with critical notes of Leunclavius) (Condition: Vellum soiled, especially the back. Ownership inscription on the front pastedown and the title. Name cut out of the title at the lower edge, resulting in a hole of 3,5x1,2 cm. Paper yellowing) (Note: Dio Cassius Cocceianus of Nicaea in Asia Minor was born ca. 164 A.D. He held several high state offices (twice consul). He wrote in Greek a Roman history (Rhômaikê Historia) in 80 books, from the founding of the city of Rome till 229 A.D, the year of his own second consulate. His work 'appears to be based on republican annalistic tradition, Livy, or Livy's sources (...), imperial annalistic tradition, and for contemporary events', the time of Marcus Aurelius and the Severian dynasty, 'his own high authority. Unreliably about republican institutions and conditions, from Caesar onwards he used his constitutional experience, at first colouring events with his ideas of imperial absolutism, (...) but later handling his material with full knowledge. Annalistic in arrangement (...) his narration concentrated on political aspects, in the manner of Thucydides, giving a rhetorical narrative in Atticist style'. (OCD 2nd ed. p. 345) § The 'editio princeps' of Cassius Dio was published in 1548 by Robertus Stephanus. The first Latin translation appeared ten years later in Basel, and was made by the German scholar Xylander, in German Wilhelm Holzman, 1532-1576. He was professor of Greek at the University of Heidelberg, and a translator and editor of late antique and byzantine writers. He produced e.g. the 'editio princeps' of Marcus Aurelius' Meditations. His gifted pupil Johannes Leunclavius, or Hans Loewenclau, 1541-1594, who had hoped to succeed Xylander in 1576, but failed because he was considered to be a 'cryptocalvinist', revised and augmented Xylander's translation of Cassius Dio, and had it published in 1592. Leunclavius added also a collection of critical notes of his own. Leunclavius is known for his Latin translations of Greek church fathers, Gregorius Nazianzenus (1591), Gregorius Nyssenus (1567), and of Xenophon (1569, 1594) and Zosimus (1576, 1593). He edited and translated, following the steps of Xylander, several Byzantine authors, among whom the 'Apomasaris Apotelesmata', a dreambook (1577), the Annales of Michael Glykas (1572) and Constantine Manasse (1573). With his edition of the Basilica (1575) and his posthumously published 'Juris Graeco-Romani tomi II' (1596), he is considered to be one of the founders of the study of the Byzantine legal system. (Neue Deutsche Biographie 15 (1987), p. 95 f.)) (Provenance: On the front pastedown: 'Petrus Iaenichius, Thorn, 1738'. Petrus Iaenichius, in German Peter Jänichen, 1679-1738, published in Wittenberg in 1706 a 40 page theological dissertation 'Christianismum Stoicum hodieque redivivum'. On the title the author is referred to as 'hactenus Fac. Phil. adiunctus, nunc Illustris Gymnasii Thoruniensis Rector vocatus'. He published in Thorn on the history of Prussia and Poland. The last part of his four volume 'Meletemata Thoruniensia seu dissertationes (...) ad historiam maxime Polon. et Prussicam (...) spectantes', was published poshumously in Thorn in 1762. (Slavica Gottingensia 1685 & 1686) On the title in old ink: 'A.J', or A.F. v. Hoijm me possidet'. Von Hoijm, a variant of Hoym?, was probably of noble birth. (See Wikipedia 'Hoym, Adelsgeschlecht') (Collation: *8, A-Z8, Aa-Zz8, AA-ZZ8, AAa-FFf8, GGg4) (Photographs on request)
Book number: 120136 Euro 380.00