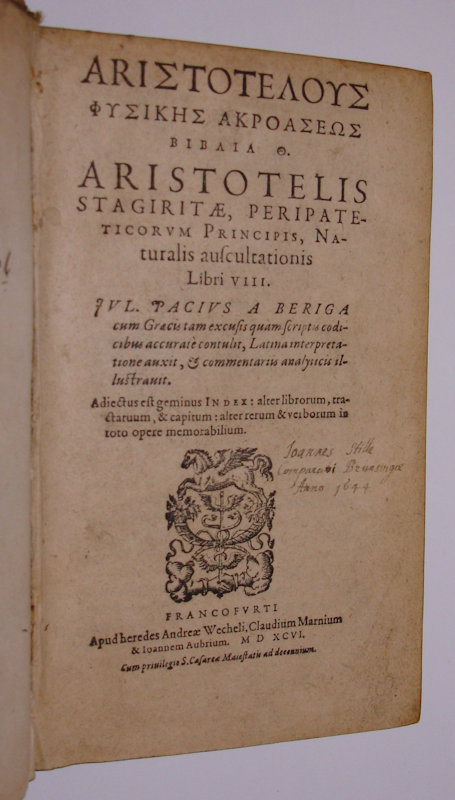 ARISTOTELES. ARISTOTELOUS PHUSIKÊS AKROASEÔS BIBLIA TH'. Aristotelis Stagiritae, Peripateticorum Principis, Naturalis auscultationis libri VIII. Jul. Pacius a Beriga cum Graecis excusis quam scriptis codicibus accurate contulit, Latina interpretatione auxit, & commentariis analyticis illustravit. Adiectus est geminus index: alter librorum, tractatuum & capitum: alter rerum & verborum in toto opere memorabilium. Frankfurt (Francofurti), Apud heredes Andreae Wecheli, Claudium Marnium & Iohannem Aubrium, 1596. 8vo. (XXIV),992 (recte 984) p. Vellum. 17 cm. <Important edition of the Physics, one of Aristotle's principal works> (Ref: VD16 A 3554; Hoffmann 1,286: 'Durch d. Vergleich v. Heidelb. Mss. hat d. Ausg. krit. Werth'; Cranz, 'A bibliography of Aristotle editions, 1501-1600', no. 108.745'; cf. Neue Pauly, Supplementband 2, p. 73 where Pacius' edition of the complete Aristotle, Geneva 1597, is mentioned) (Details: 5 thongs laced through the joints, 2 of them are broken. Woodcut printer's mark on the title, depicting the winged horse Pegasus gracefully arched over a caduceus and 2 intertwined cornucopiae. Edges dyed gray/blue. The Greek text and the opposing Latin translation, the first 336 pages, are printed in 2 columns) (Condition: Vellum scuffed, spotted and worn to the extremes. Upper joint split for the greater part. Back somewhat damaged. Occasional contemporary ink underlinings & annotations.(Note: 'The influence of Aristotle, 384-322 BC, on Western intellectual life is immense, so much so that once one begins to track it, no field of inquiry can be identified that it would be safe to overlook. Aristotle laid the foundations for not one but two sciences, logic and biology, an achievement unmatched by any thinker before or since'. (The Classical Tradition, Cambr. Mass. 2010, p. 70) For centuries his authority was so great that it prevented the further development of some of the sciences, e.g. astronomy. A.E. Taylor, who thought that the qualifications of Aristotle as a man of science have been much overrated, argues that Aristotle's ascendancy over thought in certain areas, biology, astronomy, is to be regretted, on account of his physical doctrines. The early 17th century English philosopher Francis Bacon found the veneration for Aristotle one of the chief hindrances to the free development of natural science. (A.E. Taylor, 'Aristotle', N.Y. 1955, p. 61/62) Nevertheless, the Phusikês akroaseôs, or Naturalis auscultatio, nowadays known as the Physics, or Physica, is one of the most important works of Aristotle. The title Physics is misleading to a modern reader, 'as a matter of fact the ancient name for it is phusikês akrôasis', i.e. Lectures (literally 'hearing') on Nature. It discusses, not such laws as are generally studied by a modern physicist, but rather the fundamental ideas of matter, motion and so forth, leading up to the famous conception of God as the ummoved mover of the whole'. (H.J. Rose, 'A History of Greek Literature, London, 1965, p. 274/75) § This 1596 edition of Aristotle's Physics was produced by the Italian Aristotelian scholar Julius Pacius a Berige, or in Italian Giulio Pace de Beriga, 1550-1635. He had protestant sympathies and had to flee to Geneva. He was an itinerant scholar, he was professor in Geneva from 1575 to 1585. He taught law at the University of Heidelberg from 1585 to 1595. Later we find him teaching Greek and law at the Academy of Sedan, the Universities of Nimes, Leiden, Grenoble, Montpelliere, Valence and finally at Padua. Pacius showed a humanist's concern for the accurate establishment of the Greek texts and their accurate translation into Latin. He was the editor, translator and commentator of Aristotle's Organon, (1584, 1585, 1591, 1597 (Wechel at Frankfurt), 1598, 1605, 1617, 1682) one of the most widely used editions of his time. His edition of the Phusikês akroaseôs of 1596 was repeated in 1608 and in 1629. Pacius, who was a jurist too, edited also the Corpus Juris, which was reissued several times. (J. Berriat-Saint-Prix, 'Notice sur Julius Pacius a Beriga, jurisconsulte et philosophe des XVIe et XVIIe siècles', Paris, 1840; easier, but much shorter, Pacius' lemma in Wikipedia) (Provenance: Two bookplates and a small inscription on the front pastedown, which belong together. The first is an armorial bookplate: 'Ex libris Hans Schless'. The second bookplate: 'Ex libris D.F.' It depicts some pharmacist's paraphanalia. The inscription on the pastedown below these two bookplates explains it all: 'Skaenket Dansk Farmaceutforening, Bibliotek af Hans Schlesch, 8 III 1955'. This book was donated to the Library of the Danish Union of Pharmacists (D.F.) by Hans Schlesch in March 1955. Dr. Hans Schlesch, 1891-1962, was a Danish malacologist and shell-collector of worldfame. He wrote numerous articles. § On the front flyleaf the name: 'G.L. Buhrke, 1828'. (?) § On the title the ownership inscription: 'Joannes Stille, comparavi Brunsvigae anno 1644'. Not much is known about this Johannes Stille. The most substantial is perhaps the mentioning of him, if it is him, in a history of the University of Rindeln. Here it is told that he died in 1660 and that he was a member of 'philosophische Fakultät, welche als eine Vorschule der Theologie mit Recht betrachtet wurde'. (F.K.Th. Piderit, 'Geschichte der Hessisch-Schaumburgischen Universität Rinteln', Marburg 1842) Perhaps the same Stille produced in 1646 in Helmstedt this dissertation: 'Disputatio philosophica continens quaestiones miscellaneas, quam dirigente divino numine sub prae-sidio viri clarissimi & excellentissimi Dn. M. Johannis à Felden math. P. P. examinandam proponit Johannes Stille Hannoveranus'. One Johannes Stille studied some time in Leiden; in the Album Studiosorum of that University it is recorded that he was born in 1622) (Collation: *4, )(8, A-2P8, 2Q4) (Photographs on request)
Book number: 120140 Euro 975.00