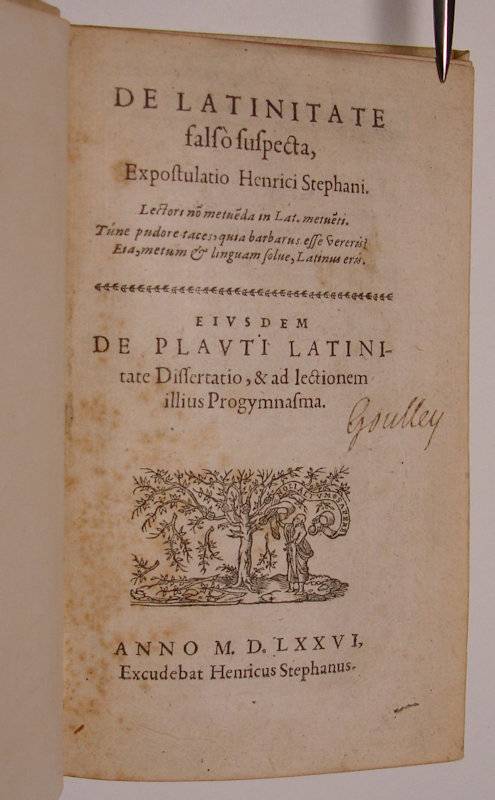 STEPHANUS, HENRICUS. De latinitate falso suspecta, expostulatio Henrici Stephani. Lectori non metuenda in lat. metuenti./ Túne pudore taces, quia barbarus esse vereris?/ Eia, metum & linguam solue, Latinus eris./ Eiusdem De Plauti Latinitate Dissertatio, & ad lectionem illius Progymnasma. N.pl. (Geneva), Excudebat Henricus Stephanus, 1576. Small 8vo. (XVI),400 p. Modern vellum 15 cm An attack on Ciceronianism, the cult of the usage of Cicero as the only correct Latin (Ref: GLN-2585; Schreiber, Estiennes, n° 198; Brunet 2,1079; Graesse 2,507; Ebert 6974; Renouard p. 144: 1576,3) (Details: Printer's Olive tree device of the Stephanus family on the title, motto: 'Noli altum sapere', short for 'Noli altum sapere, sed time', in English 'Donot be high-minded, but fear'. (Epistola Beati Pauli ad Romanos 11,20) Edges dyed red) (Condition: Title slightly foxed; Old name on the title) (Note: De latinitate falso suspecta, a work of the French printer/scholar Henri Estienne, latinized as Henri Stephanus, 1528/31 - 1598, is a treatise on the Latin language, written four years after the Thesaurus Graecae linguae. 'This was an attack on Ciceronianism, the cult of the usage of Cicero as the only correct Latin, and as such it contributed to an argument that had been going on since the second half of the 15th century. Ciceronianism had its own dictionary, that of Mario Nizzoli (Nizolius), which had first apeared as Observationes in Ciceronem in 1535, documenting approximately 20,000 words; 50 or more further editions appeared under various titles in the next hundred years. (...) The Ciceronians, Henri argued, condemn certain Latin usages which they suppose to be modern Gallicisms. So, for instance, they censure the use of pausa, supposing it to be a modern formation from French pause - but it is to be found in the ancient fragmentary poets Ennius and Lucilius; a number of examples of its use by Plautus are given in the Latinae linguae thesaurus; Robert Estienne's edition of Plautus contains others; and so on. The cumulative effect was not only to show the weaknesses of a Ciceronianism untempered with the knowledge of other Latin texts, and particularly those written before the age of Cicero, but also to show the numerous parallels between Latin and French usage. 'This work', as Feugère pointed out, 'might, on account of the striking analogies between the two languages which it present, also be called a Traité de la conformité du français avec le latin'. So it might; and that suggests a reorientation of Henri's thought. No longer was he observing only the analogies between Greek and French. Now he was seeing those beween Latin and French and, more specifically, between non-Ciceronian Latin and French. And these analogies, he realized, did indicate genealogical filiation. This struck him particularly as he wrote the treatise on Plautus' Latin usage which is appended to the De latinitate falso suspecta: after commenting on his own affection for Plautus, he added: 'For sure, it is fitting that the French love the Latinity of Plautus more than any other people do, for in many respects, his speech has greater affinity with theirs than with anyone else's'. Henri was developing the theory that French may be descended from archaic Latin, and may preserve archaic features that had been rejected from formal written Latin by the time of Cicero'; a similar argument was being developed at the same time by the Italian grammarian Lodovico Castelvetro. Henri's argument was, like Castelvetro's, a development of that of the grammarian Jacques Dubois (Jacobus Sylvius) that French had, along with some Greek and Hebrew loan elements, a Latin basis that differed to some degree from classical written Latin - though Dubois did not go so far as to indentify this explicitly as vulgar Latin. Students of French antiquity such as François Hotman proposed in the 1570s and 1580s that French was 'a mixed language, resulting from the 'corruption' of Latin mixed with the language of the Gauls and then of the Franks. Henri's argument was more dramatic than theirs: he was not thinking in terms of corruption so much as of the continuation of a variety of Latin that had been spoken and written in the age of Plautus, and had lived on as a spoken variety through the Golden Age and the fall of the Roman Empire. Had he ever written De latinitate prisca in which he announced his intention of treating Plautine Latin more fully, he might have been able to pursue this point to good effect'. (J. Considine, 'Dictionaries in Early Modern Europe: Lexicography and the Making of Heritage', Cambridge 2008, p. 63/65) Henri Estienne was indeed way ahead of his time with his suggestion of the existence of a 'sermo cotidianus' in colloquiis familiaribus' (Praefatio p. *5 verso). Most Latin scholars of his time did not have an idea of what we understand today by Vulgar Latin. Scholars were imbibed by the artificial language of Latin literature, the Latin of the Vulgate and the Church Fathers, which one-sidedness prevented them to relate French words to Latin words, and to see in Latin the starting-point for French. Classical scholarship had to wait about 150 years before a clear recognition of Vulgar Latin emerged) (Provenance: Name on the title: 'Goulley') (Collation: *8, a-2B8) (Photographs on request)
Book number: 120165 Euro 900.00