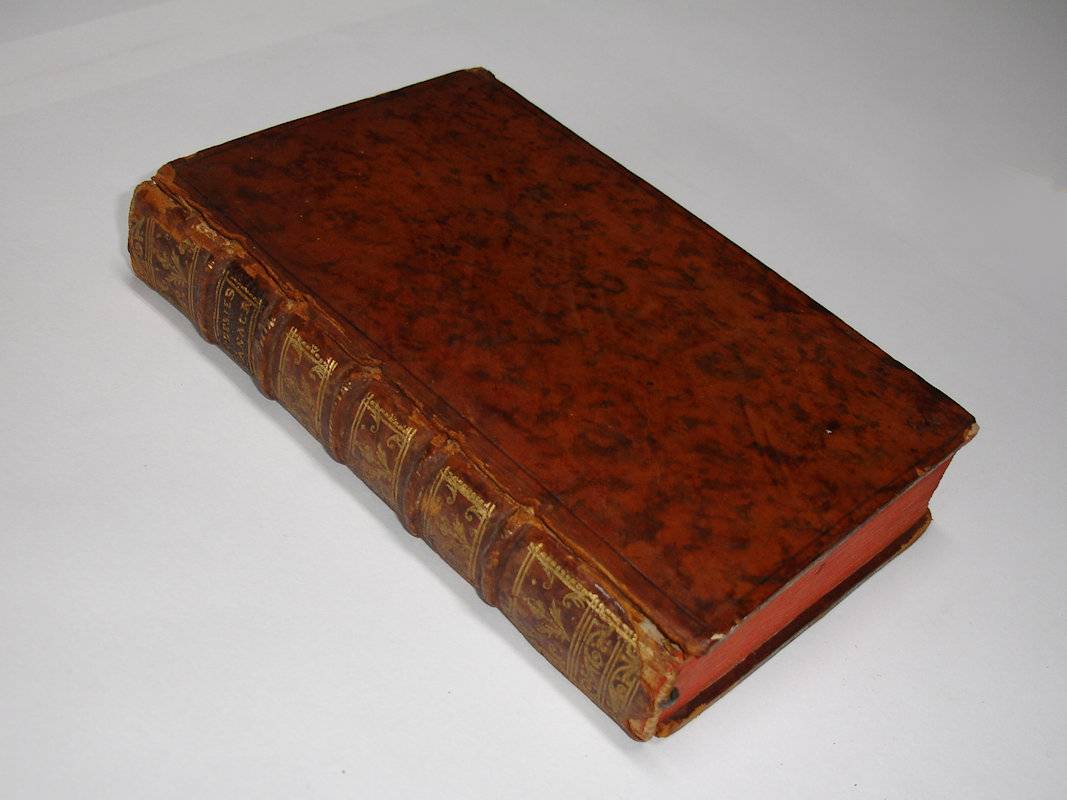 ANACREON & SAPPHO. Les poesies d'Anacreon et de Sapho, traduites en François, avec des remarques, par Madame Dacier. Nouvelle édition, augmentée des notes latines de Mr. Le Fevre & la traduction en vers François de Mr. De la Fosse. Amsterdam, Chez la Veuve de Paul Marret, 1716. 8vo. 2 parts in 1: (IV, frontispiece & title),(XXVIII),300,(4);XXIV,104,(2) p. Calf 17 cm (Ref: Brunet 1,254; Hoffmann 1,133; Moss 1,54/55; Graesse 1,110; Ebert 578) (Details: Back gilt and with 5 raised bands, red morocco shield in the second compartment. Marbled endpapers. Edges dyed red. Engraved frontispiece, depicting a bacchic scene, bacchus carried by a thiasos. The book has two titles, bound immediately after each other, the first one is printed in red and black, and shows an engraving which depicts a male portrait on a shield, the shield being flanked by 2 winged angels that blow a trumpet (Famae?). The second title omits the mentioning of the the translation 'en vers françois' by 'Mr. De la Fosse'. The second part of the volume contains this verse translation. The second title bears the woodcut printer's mark of Marret, a soaring Fama, blowing her trumpet) (Condition: Both joints split, cover worn at the extremes, head & tail of the spine damaged, corners bumped. Some foxing. The frontispiece and the first title page show heavy foxing. Bookplate on the front pastedown) (Note: The poems of the Greek lyric poet Anacreon, born ca. 570 B.C., are concerned mostly with the pleasures of life. A few dozen fragments of his poetry survive. Also survive about 60 poems, the socalled Carmina Anacreontea, written in the next 6 centuries, once ascribed to Anacreon, that gave voice to the Anacreontic way of life, sensual longing and alcoholic festivity, wine, women and song. He enjoyed widespread popularity during antiquity. The 'Editio Princeps' was published by Henry Estienne in 1554. The poems were highly valued for their literary quality. The editio princeps' 'established 'Anacreontic' as a popular category for lyric poetry in several European vernaculars over the next two centuries'. (The classical tradition, Cambridge Mass., 2010, p. 43) Anacreon and Anacreontics were translated by Ronsard, Goethe, Belleau, and the famous 'foeminarum doctissima' Madame Dacier, 1654-1720, also known for her translation of Homer, Plautus, Terence, 2 plays of Aristophanes, and her editions of Callimachus, and of Florus, Dictys and Dares, Aurelius Victor, and Eutropius. Her father and teacher, the classical scholar Tanneguy Le Fèvre (Mr. Le Fevre on the title), latinized as Tanaquil(lus) Faber, 1615 - 1672, had published earlier, in 1660, an edition of Anacreon and Sappho. His daugther Anne, who married the classicist André Dacier, followed him in his footsteps, and produced several new Anacreon editions, accompanied with a translation. The first one appeared in Paris in 1681. Despite its popularity the scholarly world lost interest in the collection in the course of the 19th century as it became obvious that the Carmina Anacreontea were not composed by Anacreon himself. As a consequence scholarship ever since has been very limited, and focuses upon questions of dialect, dating and the niceties of textual criticism. There does not exist a modern full-scale commentary of the poems. The fate of the other early Greek lyric poet, Sappho, figuring also in this 1716 edition, was the opposite. There are numerous editions, with or without notes and commentary, and translations. Monographes and articles on her and her poetry are plentiful) (Provenance: On the front pastedown a bookplate: 'The Brooklyn Public Library. Bought from the income of the bequest, received in 1885, of Loftis Wood'. From Google we gather that Loftis Wood was a rich New York entrepreneur who left 10.000 dollars to the Public Library of Brooklyn for the purchase of valuable books, and periodicals. A huge 'Loftis Wood Mausoleum' stands at Green-Wood Cemetery, Brooklyn. See for this mausoleum Google images) (Collation: pi2, V8, **6; A-T8, a-h8, i1) (Photographs on request)
Book number: 120203 Euro 180.00