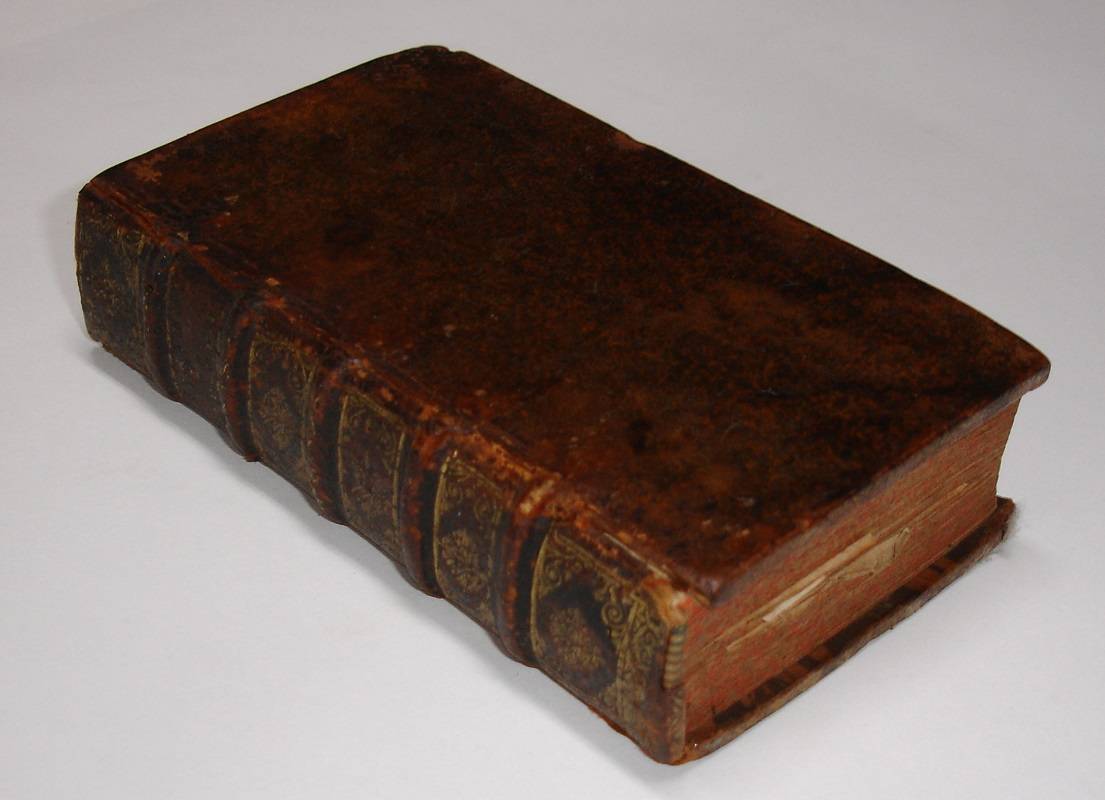 BARTHOLINUS,Casp. Casp. Bartholini Thom. Fil. De tibiis veterum, et earum antiquo usu libri tres. Editio altera, figuris auctior. (Bound with:) Casp. Bartholini Thom. Fil. De Ovariis mulierum et Generationis historia epistola anatomica, antea Romae edita. Cui jam accessit alia ejusdem argumenti. Ad 1: Amsterdam (Amstelaedami), Apud JHenr. Wetstenium, 1679. Ad 2: Amsterdam (Amstelaedami), Sumptibus JHenr. Wetstenii, 1678. 12mo. 2 volumes in 1. Ad 1: (XXIV),415;(5), 22 full page engravings in the text, 5 smaller text engravings, and 5 folding plates; a frontispiece and a portrait of Casparus Bartholinus at the age of 22. Ad 2: 69,(2),(1 blank) p. Calf 14 cm (Ref: Ad 1: Brunet no. 29042. Ad 2: Bibliotheca Osleriana no. 1922) (Details: Back gilt and with 5 raised bands. Frontispiece, depicting a seated satyr, surrounded by pipes, flutes, horns, trumpets, and other wood-wind instruments. Woodcut printer's mark of J.H. Wetstein on the title, depicting a bearded scholar who is surrounded by symbols of wisdom and scholarship; the motto is: 'Consultoribus istis', 'With them as advisors'. The engraved portrait is of a 22 year old Casparus Bartholinus. On the plates statues, reliefs etc. of instruments and people with instruments) (Condition: Binding scuffed; head and tail of the back chafed; front joint starting to crack; 2 small and almost invisible wormholes at the head of the spine; a bump in the outer edge of the lower board. Some pencil annotations on the front pastedown. Paper yellowing) (Note: Ad 1: The Danish anatomist and physician Caspar Bartholin, or Bartholinus (the Younger, or Secundus), 1655-1738, was the last of the famous Bartholin dynasty of scholars and physicians. In 1674, at the age of 19, he was appointed professor of philosophy. Following this appointment he travelled for his studies through Europe for three years. On his return to Copenhagen he began to teach physics. He also lectured on anatomy. Bartholin mainly published on anatomy and medicin. This book on the pipes and flutes of the ancients, which was first published in Rome in 1677 was a work of his youth. § The second far slimmer volume of 'De Ovariis', bound after 'De tibiis', is of far greater importance for the history of science, to be precise, medical science. In 1677, at that age of 22, Caspar Bartholin was the first to describe the Bartholin's glands in 'De ovariis mulierum' (Rome 1677). This Amsterdam edition of 1678 is the first reissue of that ground breaking treatise. See for the details and the importance of 'Bartholin's glands' Wikipedia. The book about musical instruments is rather common, but Bartholin's book on ovaries is rare. In Rare Book Hub we found only one copy, in 1979) (Collation: *12, A-R12, S6; A-C12, 5 folding plates, frontispiece, portrait on leaf *12 verso; 27 engraved text illustrations (of which 22 full page)) (Photographs on request)
Book number: 120210 Euro 1150,00