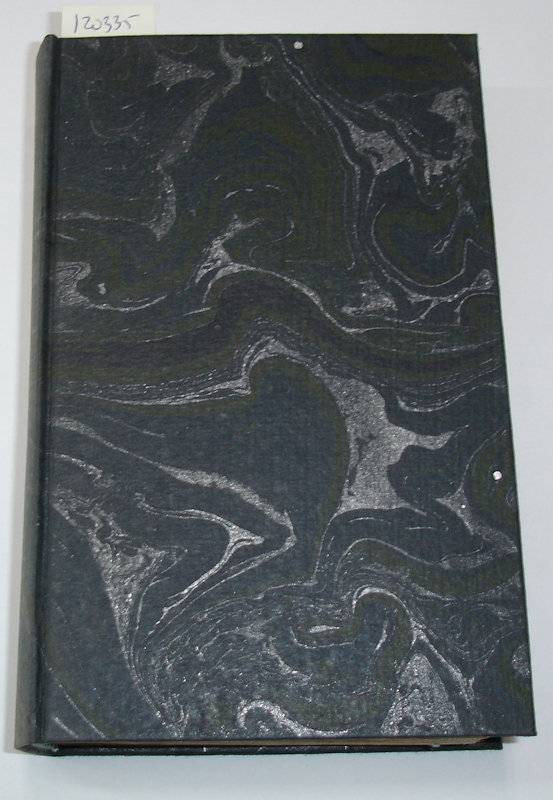 BRUSONIUS, LUCIUS DOMITIUS. Speculum Mundi, in quo per serias facetasques narratiunculas tota humana vita graphice exprimitur. Collectore L. Dom. Brusonio, ex Basilicata Regni Neapolitani oriundo. Ad Romanam editionem renovata editio. Lyon (Lugduni), Apud Ioan. Ant. Huguetan & Marc. Ant. Ravaud, 1658. (Colophon at the end: 'Lugduni, Excudebat Symphorianus Barbierus') 8vo. (XVI), 499,(4 index),(1 blank) p. Modern marbled boards. 19 cm 'The aim of this commonplace-book: a general education in morals, together with the refining of rhetorical skills' (Ref: Worldcat 491739875) (Details: Engraved printer's mark on the title, depicting a zodiac sphere, that is held by a hand coming out of a cloud; the sphere is flanked by two winged putti, who uphold a banner with the motto: 'Universitas rerum ut pulvis in manu Jehovae'. Woodcut initials) (Condition: All four edges of the soiled title have been repaired with a strip of paper, the lettering is partly fading because of wear. The lower corner of the two following leaves have also repairs. A small hole in the title. Lower margin of the first 5 gatherings waterstained. Paper yellowing) (Note: 'To intrigue and entertain with sagacious observations, sophisticated humour, and the sheer pleasure of telling stories in the form of well-turned anecdotes was one intention of the earlier, and very influential, humanist exempla collections. It is well expressed in the title of a commomplace-book edited by Lucius Domitius Brusonius (Brusoni, dates unknown) and published in 1518: 'Witticisms and examples'. (Facetiarum Exemplorumq. libri VII) The rhetorical bias of this compilation of funny stories is explicit in the preface, with its insistence that dicacitas, urbanitas (pungent wit, humour, elegance of taste and refinement of speech) are essential components of persuasive discourse. The work itself assembles its material under loosely alphabetised heads, primarily moral in import, going from avaritia to uxor. Short paragraphs, usually starting with the name of the protagonist, narrate stories from history that illustrate the topic by positives and contraries, feeding into epideictic oratory examples of conduct to be praised or to be blamed. Other features are direct speech, in the manner of apophthegmata, sententiae imported from other authors, quotations from Martial to set the tone, and a cavalier attitude to attribution. Published at Rome, Brusonius belongs more to the tradition of Sabellicus than to the earnest environment of northern pedagogues. But they were to make him their own in the 1550s after Conradus Lycosthenes (Konrad Wolffhart, c. 1518-1561), who lived and worked in Protestant Basle, had published a corrected and much amplified edition of the work. (L. Domitii Brusonii Contursini Lucani, viri clariss. Facetiarum Exemplorumq. Libri VII : Opus quidem eximium, ac mirabili cùm rerum tum Sententiarum scitu dignißimarum atque iucundißimarum varietate refertißimum : nunc primùm ab innumeris, quib. scatebat, erratorum monstris repurgatum inq. lucem editum, Basle 1559) Lycosthenes presents it to the municipality of Schaffhausen as a contribution to the restoration of ' true religion and piety' in that city and emphasises its value to civic society, as well as to moral formation. He allows wit its proper time and place in oratory, but his stress is all on the gravity of the historically well grounded moral advice that can be gleaved and cited. Lycosthenes retains the commonplace ordering of the original, he makes it more searchable by providing an index, and systematically inserts text references. He also adds many more heads and exempla to fulfil the promise of copia also made in the preface, simultaneously supplying a great deal of information about behaviour both curious and exotic'. ('(Un)masking the Realities of Power: Justus Lipsius and the Dynamics of Political writing in early Modern Europe', edited by E. Bom, M. Janssens & T. van Houdt, Leiden 2011, p. 104/05) The expanded version that Lycosthenes produced in 1559 was much in demand. It was reissued several times. Our copy of the edition of Lyon 1658 includes the epistola dedicatoria of Lycosthenes of 1559, and the praefatio of 1518 of L. Domitius Brusonius. § The compiler of this commonplace-book did as earlier and later compilers did, he built his collection more often quoting from other commonplace-collections than from ancient authors. 'The matter contained in commonplace-books was in constant circulation at least up to the middle of the 17th century, a common resource of which no one had ownership and all owned, to reproduce, paraphrase, alter, and manoeuvre as they pleased'. (Op. cit. p. 105)) (Collation: *8, a-z8, A-H8, I4 (leaf I4 verso blank)) (Photographs on request)
Book number: 120335 Euro 230.00