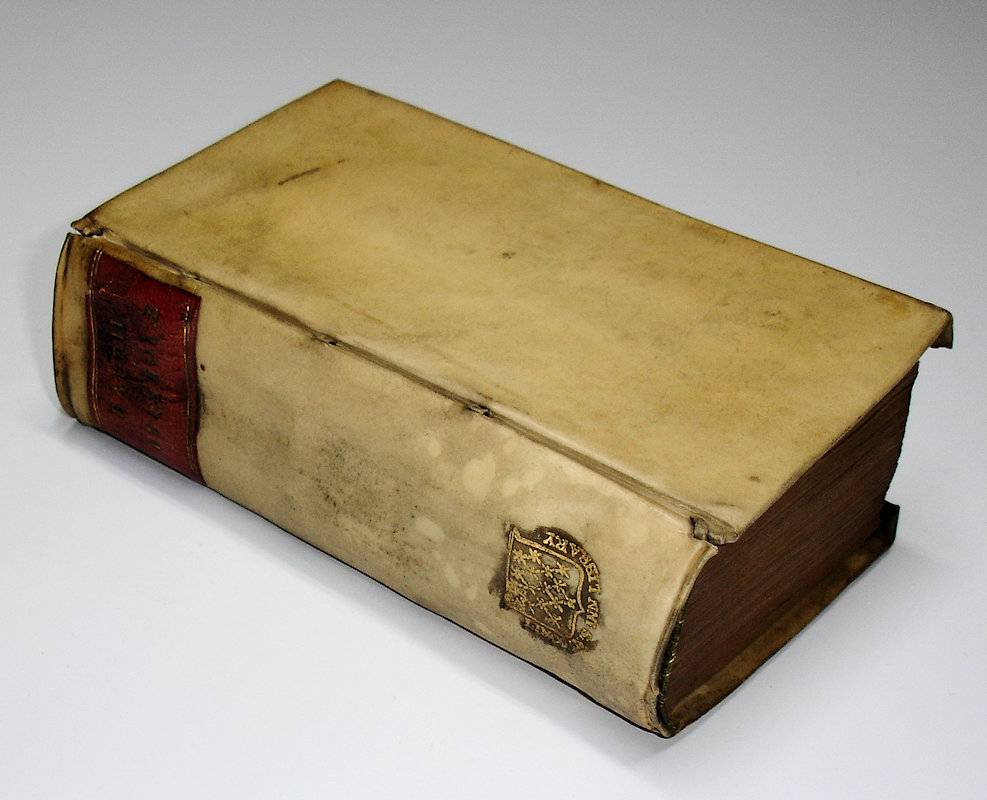 BAUDIUS,D. Dominici Baudii Epistolae semicenturia auctae; lacunis aliquot suppletis. Accedunt eiusdem orationes et libellus de foenore. Leiden (Lugduni Batavorum), Typis Francisci Hackii, 1650. 12mo. (XXIV), 696 p., with an engraved title & engraved portrait of the author. Contemporary overlapping vellum 14.5 cm (Details: 5 thongs laced through the joints. Red morocco label with gilt lettering on the back. At the foot of the back a gilt stamp. Engraved title, depicting a scholar seated at a desk; he hands over a letter to a messenger; the Greek god Hermes is looking on; in the distance two running horses; above this scene Fama, who blows her horn. The portrait is engraved after the portrait of Jacob Matham of 1608 (Website Rijksmuseum Amsterdam, item no. RP-P-1883-A-7070) (Condition: Vellum age-toned and slightly soiled. Small oval stamp on the verso of the title. Paper yellowing, some faint foxing) (Note: The erudite Flemish humanist and cosmopolitan scholar Dominicus Baudius, 1561-1613, was one of the best Neolatin epistolary talents of his time. He excelled also in iambic poetry. In 1603 he was appointed professor Eloquentiae at the University of Leiden, where his friend J. Scaliger lectured also. Baudius lectured on Tacitus and Roman law. Booze and women brightened up his life, but brought him besides financial problems, also troubles with students and the officials of the University. In 1612 he succeeded in marrying a wealthy woman, but in August 1613 he went on a drinking binge for several days on end, and drank himself in no time, first to madness and than to death. Shortly after his death his friends, among who Petrus Scriverius and Hugo Grotius, intended to collect and publish a collection of his famous correspondence. The first collection of 200 letters, Epistolarium Centuriae duae, was published two years after his death in Leiden in 1615 by Godefridus Basson. The edition was a great success and there came a demand for more. Between 1615 and 1662 thirteen editions of the correspondence were published, in Leiden and Amsterdam, three of them in Leipzig (1625, 1631 and 1635). The success resulted in the search for still more letters. A new edition, augmented with another 100 letters, Epistolarum Centuriae tres, came in 1620. This 1650 edition offers the most complete collection of letters, augmented by another fifty. The letters were addressed to Janus Dousa, father and son, J. Scaliger, J.A. de Thou, J. Lipsius, Casaubon, Hugo Grotius and many others. Occasionally there are letters, e.g. by Lipsius, addressed to Baudius. At the end have been added the collected speeches of Baudius, and his treatise on interest, 'libellus de foenore'. (NNBW 6,81/82) (Provenance: On the back a gilt armorial stamp of 'Lincoln's Inn Library'. On the verso of the title a small oval withdrawal stamp of 'Lincoln's Inn Library'. This centuries old library of the Honourable Society of Lincoln's Inn still exists in London. It is nowadays 'principally a modern working legal reference library for use by any member of Lincolns Inn and by the Bar as a whole. It is staffed by experienced and qualified law librarians, who are always willing to help members and barristers whether in person or by phone or email. As well as providing a full range of legal databases, it prides itself on the depth of its traditional printed collections. The Library also works in close collaboration with the libraries of the other Inns of Court, so that our collections and services complement each other. Through its collections of rare books and manuscripts it also serves the wider scholarly community'. (Quoted from the Library's website) § On the verso of the front flyleaf: 'Simon van Beaumont, 21/3/1665'. Van Beaumont, 1741-1726, was a wealthy Dutch diplomat and botanist. The hortus botanicus of Amsterdam acquired many plants from his garden. Van Beaumont is praised by Linnaeus for his many contributions to botany and the introduction of foreign plants in Europe. (Van der Aa, 2/221) (Collation: *12 (leaf *12 is the portrait), A-2F12)) (Photographs on request)
Book number: 120412 Euro 210.00