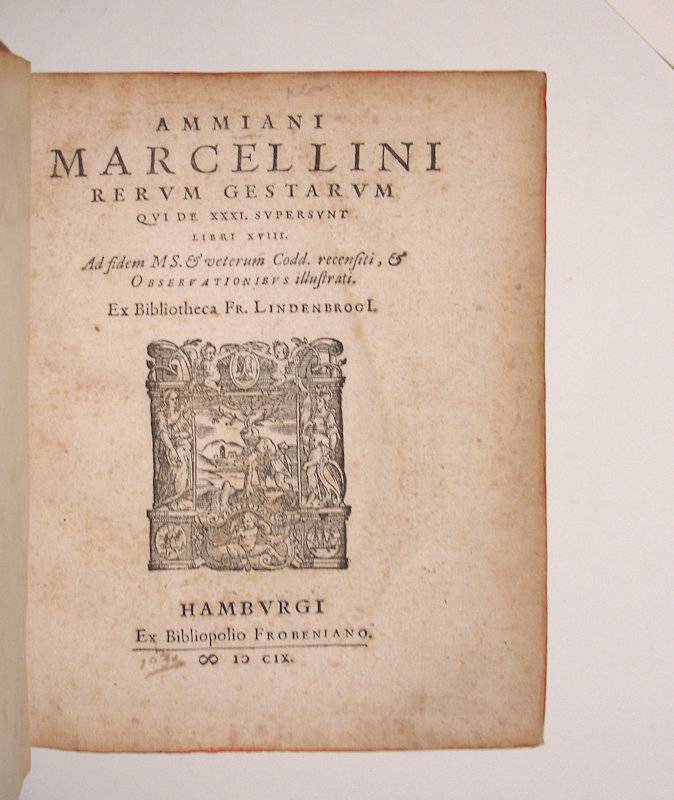 AMMIANUS MARCELLINUS. Ammiani Marcellini Rerum gestarum qui de XXXI. supersunt libri XVIII. Ad fidem MS. & veterum Codd. recensiti, & Observationibus illustrati. Ex. bibliotheca. Fr. Lindenbrogii (&:) Fr. Lindenbrogii Observationes in Ammianum Marcellinum; et in eundem Collectanea variarum lectionum. Hamburg (Hamburgi), Ex Bibliopolio Frobeniano, 1609. 4to. 2 volumes in 1: (VI),504 (recte 502),(49);276,(1 errata) p. Overlapping vellum. 21.5 cm (Ref: VD17 23:230328M; Schweiger 2,3: 'Neue Rezension nach Mss, besonders trefflichen Florentiner Codex'; Dibdin I,256: 'very excellent edition, the basis of many following ones'; Moss 1,38; Ebert 527; Graesse 1,104) (Details: 6 thongs laced through the joints. Short title in ink on the back. Woodcut printers' mark on the title, it depicts a gardener planting a tree, the motto is 'Posteritati'. Some woodcut initials and headpieces. Edges dyed red) (Condition: Binding soiled & scratched. Name on the front flyleaf. Paper age-toned. Lacks owing to a binder's error the last preliminary leaf (*4), with on the recto side the last page of the 'praefatio' and a blank verso side; of this missing leaf a photocopy is added) (Note: Ammianus Marcellinus, ca. 330-400 AD, was a Greek who served as a high officer in the Roman army. He carried arms under the emperors Constantius, Julian and Valens. His work 'Res Gestae', meant to continue the work of the Roman historian Tacitus, describes the history of Rome from Nerva till the downfall of the emperor Valens in 378 in 31 books. In combining history and biography he follows his example. The first 13 books of the 'Res Gestae' are lost. What is left begins with book 14, the year 353. 'Ammianus' Gesammtleistung reiht ihn unter die grossen Historiker Roms ein'. (Neue Pauly, I col. 598) His style is not polished, but rather harsh and obscure, the style of a soldier and a Greek. ('Haec ut miles quondam & Graecus (..) exorsus', Liber 31) It should also be remembered that he wrote Latin in a period when most historical works were destitute of elegance. Still, the work is valuable for its veracity. § This 1609 edition with commentary, produced by the German legal and classical scholar Friedrich Lindenbrog, 1573-1648, is the first edition which the Dutch scholar P. de Jonge mentions in the short list of normative Ammianus editions in the latest multi volume Groningen Ammianus edition, a project that was started in 1972 and is still in progress. The first part of this edition of 1609 contains the Latin text, and the second part 266 pages with the 'observationes' and a collection of 'varia lectiones'. § Sandys reports that Lindenbrog was a citizen of Hamburg, and was influenced by the genius J.J. Scaliger. (Sandys II,364) He studied in Leiden, and before this lawyer/philologist started a lucrative legal practice, he produced a number of editions of Latin authors, among them Statius, Ammianus & Terentius, works that are still to be consulted nowadays. (ADB 18, 692/93) There exist 2 versions of this edition, the text is the same, but the number of preliminary leaves differs. Ours has 3 preliminary leaves, but there are also copies with 7 preliminary leaves (VD17 1:687728). The latter edition shows also some small differences on the title, 'I.V.L' (Iuris Utriusque Licentiatus) is added to the name of Lindenbrog, and the impressum says 'in Bibliopolio Frobeniano', instead of 'ex Bibliopolio Frobeniano') (Provenance: On the front flyleaf the ownership entry of 'A.D. van Regteren Altena, Bergen') (Collation: *4 (minus leaf *4; leaf *2 blank); A-3Z4, A-2M4 (last leaf blank) (Photographs on request) (Heavy book, may require extra shipping costs)
Book number: 130025 Euro 370.00