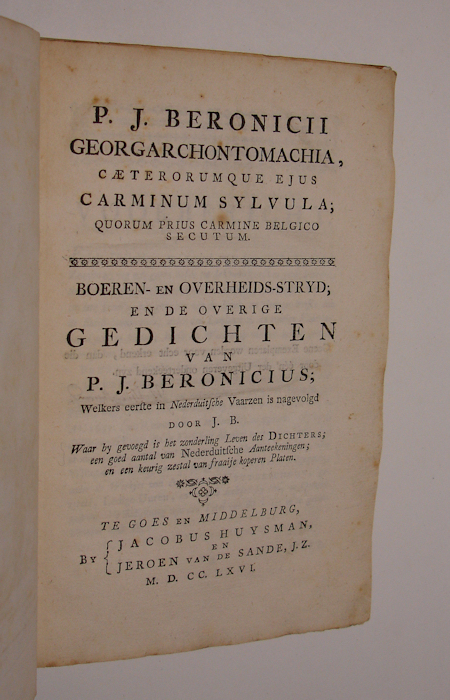 BERONICIUS. P.J. Beronicii Georgarchontomachia, caeterorumque ejus carminum sylvula; quorum prius carmine belgico secutum. Boeren- en overheids-stryd, en de overige gedichten van P.J. Beronicius, welkers eerste in Nederduitsche vaarzen is nagevolgd door J.B. Waar by gevoegd is het zonderling leven des dichters; een goed aantal van Nederduitsche aanteekeningen; en een keurig zestal van fraaije koperen platen. Te Goes & Middelburg, Bij Jacobus Huysman & Jeroen van de Sande, J.z., 1766. 8vo. XX,178 p. Modern half vellum 22 cm (Ref: Best source: C.J. Krijger, 'P.J. Beronicius Boeren- en Overheidsstryd, 1673'. Doctoraal scriptie 1986, Reliable: Winkler Prins 6e dr., vol. 3, p. 777; also important: Sizoo, Hermeneus 8 (1936) p.17/21; uncritical: Van der AA 2,442/45; NNBW 8,88) (Details: Tasteful antique style binding, with a red morocco shield on the back. Frontispiece & six scenes on three plates by Simon Fokke. The frontispiece depicts the crowning with a laurel wreath by Apollo of a beggarly fellow, who wears ragged clothing. In the distance we see the townscape of Middelburg, in the front a pile of books and the attributes of a chimney sweep; on the plates scenes of armed and angry mobs. On the verso of the title the signature of one of the publishers J. Huysman. At the end have been added 22 pages with 'adnotationes ad Georgarchontomachiae librum 1 & 2' by Petrus Rabus, followed by 20 pages filled with annotations of J.B. in Dutch) (Condition: A light brown stain on the lower margin of 3 leaves) (Note: In 1672, on the 21st of july, a false rumour swept over the Dutch island of Walcheren: 'The French fleet is landing'. These were combustable times, called in Dutch 'het rampjaar' i.e. the year of disasters, when the Dutch Republic was besieged from all quarters. At this rumour a furious mob of armed farmers invaded Middelburg, the capital of the province of Zeeland. The mob assaulted and arrested city officials considered to be traitors. In the next year a mock epic concerning this historic event was published in Amsterdam 'auctore N. Autopte', i.e. by Mr. Eyewitness. In 1676 the remonstrant minister Anthony Borremans (who died in 1683), a man well versed in Greek and Latin, reported in the 6th chapter of his Variae Lectiones that the author was one Petrus Johannes Beronicius. He procured also a biographic sketch of this Beronicius which seems to be the starting point of a mystification. Borremans tells that he and some gentlemen (J. Antonides van der Goes, Dirk Buysero, Johan Frederik Gymnich) once ran in Middelburg into a pityful drunk, who composed Latin verse incredibly fast and on the spot. He was a man of loose morals, who earned his living sweeping chimneys and grinding knives. Nevertheless this dirty little fellow 'klein, roetzwart, rond en dik, oud en slordig gekleed', who also made strange gestures, was an accomplished neolatin poet. It was said that he spoke his Latin too fast even for the classical scholar J.F. Gronovius, when they met. He also spoke Greek fluently, and could speak judiciously and scholarly about classical authors. This wonder of the world had witnessed the revolt of the farmers, and, knowing his Homer very well, produced extempore a burlesque epic about the event, the Georgarchontomachia. In february 1673 this colourful drunk was found dead in a ditch. The classical scholar and neolatin poet Petrus Rabus, 1660-1702, published in 1691 an new edition of this satyrical follow-up of the Homeric Batrachomyomachia, accompanied by a translation into Dutch and annotations. He also followed the biography by Borremans. The Latin text was published and translated once again by one J.B. in 1766. J.B. also printed the biographic sketch of Borremans, and added 20 pages of notes in Dutch of his own. The biographic data of this versifying chimney sweep were reproduced indiscriminately in later biographic surveys, like Van der Aa, and NNBW. STCN suggests that Dirk Buysero, 1644-1708, a city official of the city of Vlissingen (Flushing), who was one of the men who met Beronicius, might be the real author. There is no evidence for this. It is even improbable. Buysero did not compose one syllable of neolatin poetry. Our guess is that it might be the scholar and soldier Joan van Broekhuizen (Janus Broukhusius), 1649-1707, who was an intimate friend of Buysero and Van der Goes, and was himself an accomplished neolatin poet, and a translator. Stylistic research is needed here. A problem is that the name of J.P. Beronicius is not an invention or concoction. There exists in the city accounts of Middelburg a record of someone bearing his name, for producing some occasional verses) (Collation: *8, 2*2, A-L8, M1) (Photographs on request)
Book number: 130030 Euro 250.00