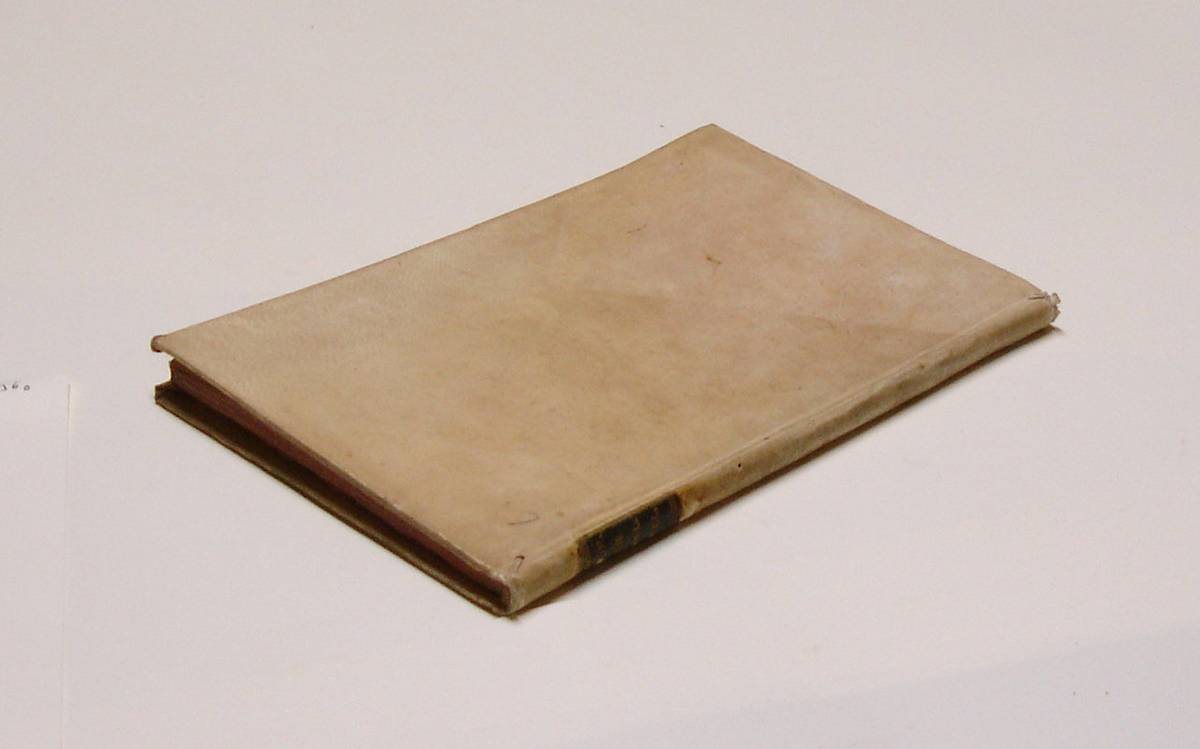 BONAMICUS, CASTRUCCIUS. Castruccii Bonamici De rebus ad Velitras gestis commentarius. Ad Trojanum Aquavivam Aragonium S.R.E. Principem Cardinalem Montis Regalis Archiepiscopum, et potentissimorum Hispaniarum, atque utriusque Siciliae Regum ad Pontificem Maximum, Sedemque apostolicam Legatum. Editio nova, auctior. Curante Cornelio Valerio Vonck. Amsterdam (Amstelaedami), Apud Marcum Michaelem Rey, 1748. 8vo. XXIV,64 p. Vellum 21 cm (Ref: IJsewijn, Companion, 2nd ed. 1,66; Michaud, Biographie Universelle, 1854 p. 147) (Details: 2 thongs laced through the joints. Green morocco label on the back. Marbled endpapers. Title in red and black. Engraved printer's mark of the French refugee printer/publisher Marc Michel Rey on the title, depicting a beehive: motto 'ingeniosa assiduitate') (Condition: Binding slightly curved and age-toned. Tail of the spine chafed. Back and morocco shield somewhat rubbed. A few tiny pinpoint spots of insect damage to the joints. A small and old ink annotation on the front flyleaf) (Note: This book is the first big success of the Italian soldier, historian and neolatin author Castruccio Buonamici, 1710-1761. He is considered te be one of the most elegant of the neolatin authors of the 18th century. After a short ecclesiastical career he enlisted in the army of the King of the Two Sicilies and Spain, Charles de Bourbon. In the war against the Austrians he distinguished himself in 1744 in the battle of Vellitri (Roman Velitrae). The Latin report of this battle by the cultivated warrior, 'De rebus ad Velitras etc.' was first published in 4to in 1746. A few years later he produced his 'Commentarii de Bello Italico', (Leiden 1750/51), a work which met with even greater success. Both works were reissued several times, and translated into French and English. Buonamici is praised for his elegant style, the power and depth of his ideas and his reliability. Both works of Buonamici were published also by the Dutch scholar Cornelius Valerius Vonck, 1725-1769, a man known as a judicious corrector of Latin authors. For 2 years he was professor at the university of Mannheim. This editionof 1748 is a new and augmented edition of 'De rebus ad Velitras etc.'. According to the impressum of the 1746 edition ('Lugduni Batavorum') it was first printed in Leiden. Vonck explains however in the prolegomena that the first edition of this book could not possibly have been printed in Leiden, because of the quality of the paper, and the printing type. And we know, he continues, that in some countries people have good reasons to conceal the 'genuinum typographi atque editionis locum'. (Praefatio p. VII). Vonck seems to be well informed, he calls himself 'non omnino harum rerum ignarus'. The first edition of 1746 must have been printed in the region where the author was born (Lucca), he concludes. Why he does not say. The book is dedicated to the cardinal Trojano Acquaviva, 1696-1747, bishop of Monreale. He represented in the Curia of the Vatican the interests of the King of Spain and the Sicilies, Charles III) (On Vonck see Van der Aa 19 327/8) (Collation: *8, 2*4; A-D8) (Photographs on request)
Book number: 130031 Euro 200.00