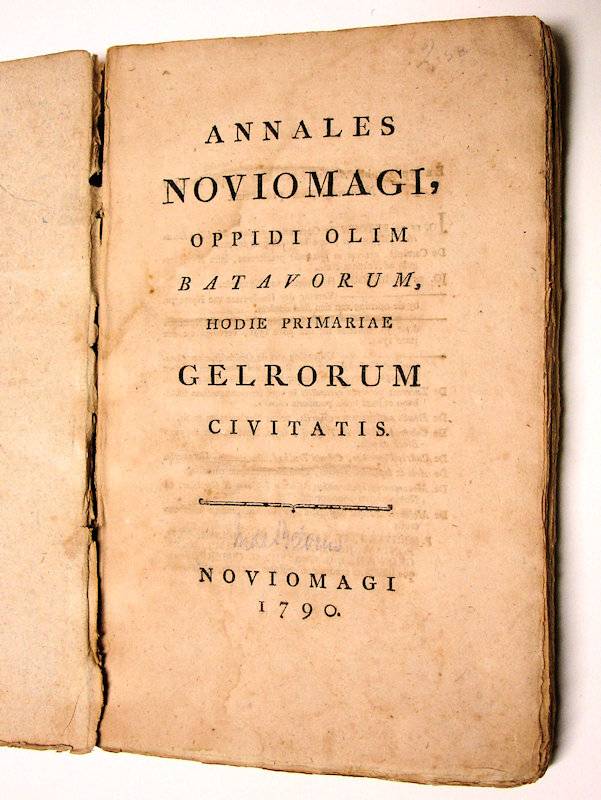 BETOUW,J. IN DE. Annales Noviomagi, Oppidi olim Batavorum, hodie primariae Gelrorum Civitatis. Nijmegen (Noviomagi), (Ex typographia Ahasuëri van Goor filiique), 1790. 4to. (IV),244,(4 index) p. Contemporary wrapppers 22 cm (Ref: STCN ppn 190386835; 1 Gheprint te Nymeghen 45.1) (Details: Uncut) (Condition: Wrappers chafed. Paper on the back gone. Paper of 9 gatherings browned. Waterstain, sometimes almost invisible, in the upper inner corner) (Note: The city of Nijmegen, in the Dutch province of Gelderland, is one of the oldest cities in the Netherlands. In the first century BC the Romans built a military limes-camp on a place of great strategic value because of the surrounding hills, which gave a good view over the Rhine valley. By 69 a village called 'Oppidum Batavorum' had formed near the Roman camp, where 'Legio X Gemina' was stationed. The settlement around the camp received in 98 A.D. Roman city rights. In 104 the Emperor Trajan renamed the town 'Ulpia Noviomagus Batavorum', better known as 'Noviomagus'. In the 8th century Nijmegen was part of the empire of Charlemagne. The Emperor of the Holy Roman Empire Fredericus II granted Nijmegen city rights in 1230. In 1364 Nijmegen became part of the Hanseatic League. During the Eighty Year's War of Independence, a revolt against the souvereign of the Netherlands, the King of Spain, which lasted from 1568 till 1648, the city belonged to the Republic of United Provinces, and had to endure multiple sieges. (Source Wikipedia) § The Annals of Nijmegen were published anonymously, and cover its history up to 1790. The author is the local historian and collector of antiquities Johannes in de Betouw, 1732-1820, who was a descendent of the archaeologist Johannes Smetius (Johannes Smith), 1590 - 1651. Smetius broke with his work on Nijmegen new ground for the history of the Netherlands, and with him starts the provincial Roman archaeology in the Netherlands) (Provenance: The provenance seems to indicate Nijmegen. On the inside of the frontcover: 'J.E.?, v. Lijnden', member of an old Nijmegen-family) (Collation: pi2, A-2H-4) (Photographs on request)
Book number: 130088 Euro 60.00