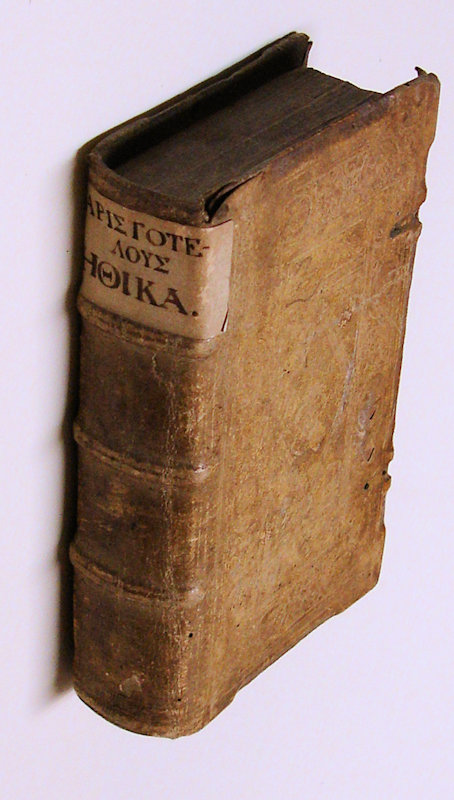 ARISTOTELES. ARISTOTELOUS ÊTHIKÔN NIKOMACHEIÔN biblia deka. Aristotelis De moribus ad Nicomachum libri decem. Ita Graecis interpretatione recenti cum Latinis coniunctis, ut ferme singula singulis respondeant: in eorum gratiam, qui Graeca cum Latinis comparare volunt. Heidelberg (Heidelbergae), 1560. (Colophon: 'Heidelbergae, Excudebat Lodovicus Lucius, Universitatis typographus, Anno salutis humanae 1560, Mense Septembri) 8vo. (VIII),567(recte 571),(1 colophon),(4 blank) p. Contemporary blind-tooled pigskin over wooden boards. 17.5 cm (Ref: VD16 A 3403; Hoffmann 1,291; Schweiger 1,52; cf. Dibdin 1,326 & Moss 1,126 for the edition of 1555; cf. Graesse 1,212; Cranz, A bibliography of Aristotle editions, 1501-1600, no. 108.398; J. Lewis, 'Adrien Turnèbe (1512-1565), a humanist observed', Genève, 1998, p. 127/28) (Details: Nice contemporary pigskin over wooden boards. Back with 3 raised bands. Boards decorated with a row of blind-tooled rolls, comprising floral motives and heads in medallions. The central panel is adorned with floral motives and palmets. The blind-stamped year 1565 or 1563 is vaguely visible at the bottom of the central panel on the upper board. Greek text with facing Latin translation, printed in 2 columns) (Condition: Pigskin age-tanned, worn and scuffed. Paper label at the head of the spine with a short title on it. Small damages to the pigskin. The clasps and catches are gone. Three small ownership inscriptions on the front endpapers. Two old initials in the lower margin of the title page. Small stamp on the verso of the title. A strip of the blank uppermargin of the title torn off, without affecting the text. Some contemporary ink marginalia) (Note: The Greek scholar Aristotle, 384-322 B.C., is one of the foremost names in the history of thought, and perhaps the most influential of all who have ever written. His influence on Western science and culture is immense. Aristotle's treatise 'Nicomachean Ethics' is perhaps 'the greatest and most famous of all works on morals, certainly the most notable exposition of Greek ethics. The title is derived from the name on Aristotle's son Nikomachos (...). It falls into ten books, and its fundamental principle is the doctrine of the Mean, according to which every virtue is a proper blend of two opposed and non-moral tendencies (as courage, of fear and daring), and lies between two vices, resulting from the exaggeration of one tendency or the other'. (H.J. Rose, 'A history of Greek literature', London, 1965, p. 275/76) § This Heidelberg edition of 1560 is a reissue of an edition with the same title, which was published in Paris in 1555 and edited by the French scholar Adrianus Turnebus (Adrien Tournèbe), 1512-1565, professor of Greek in that city, and a specialist in Greek textual criticism. In the preface (Adrianus Turnebus lectori) to the 1555 edition, repeated in this 1560 edition, Turnebus declares that he edited the Nicomachean Ethics with the help of Pier Vettori's observations (ex Petri Victorii observationibus) and some very old manuscripts (ex vetustis aliquot exemplaribus). He also realized that this Greek text should also be accessible to students of philosophy who knew only Latin. It was necessary therefore to correct and emend the Latin text. Because translators from Greek into Latin added always something of their own ideas to a translation (de suo quaedam addentes), or made the Latin text much longer by explaning paraphrases (paraphrasibus Graeca explicantes), it is not possible to bring the Latin translation into line with the original Greek text (ut singula singulis responderent). To avoid an uneven division of the text and translation, he thought it necessary to make a translation that connected the Latin translation to the Greek text (Graeca & Latina coniungerentur). (Adrianus Turnebus lectori, page a2 recto & verso) The Greek text of the edition of 1555 of Turnebus was based on the edition of 1547, which was published by the Italian scholar Pier Vettori in Florence) (Provenance: On the front pastedown a small name: 'Nagel'. § On the front flyleaf the ownership entry of: 'Daniel Walasser, Giengensis'. Who this Daniel Walasser of Gien (a French city in the department of Loiret) was, we could not find out. § On the same leaf also: 'Ex libris Jacobi Zenetti, 1821'. The German 'Privatgelehrte und Schriftsteller' Jakob Zenetti, 1801-1844, received his doctor's degree in 1829 at the University Ingolstadt-Landshut-München. He lived in Augsburg, and seems to have been a philanthropist. The Zenettistreet in Augsburg is called after him. He wrote 'Einfluss der Philosophie auf das Leben', second edition, Augsburg 1842, and some poetry, e.g. 'Der ägyptische Joseph: in vier Gesängen', Augsburg, 1843. § On the title, below the imprint, the initials D.W. § On the verso of the title a small and round stamp: 'Sammlung des Dr. Hans Hasso v. Veltheim'. In the centre of the stamp a coat of arms. Hans-Hasso Freiherr von Ludolf Martin Veltheim Ostrau, 1885-1956, was a German Indologist, anthroposophist, Far East traveler, occultist, and author. He was of old Saxon nobility. He published several books about his travels through East Asia. (See Wikipedia: 'Hans Hasso von Veltheim') Hasso was the owner of the barock castle 'Schloss Ostrau' in Ostrau near Halle (Saale), which he turned it into a meeting point of Anthroposophists from all over the world. After the Second World War he was expropriated. Part of his library and art collection was brought to the Martin-Luther-Universität Halle-Wittenberg, the remaining was confiscated by the occupying forces of the Russians. (See for this library Wikipedia: 'Schloss Ostrau') See for Hasso's portrait and death mask 'Google Images') (Collation: *4, a-z8, A-M8, N4, O4 (last 2 leaves blank) (the leaves d1 & d2 the page numbering is double) (Photographs on request)
Book number: 120139 Euro 1000.00