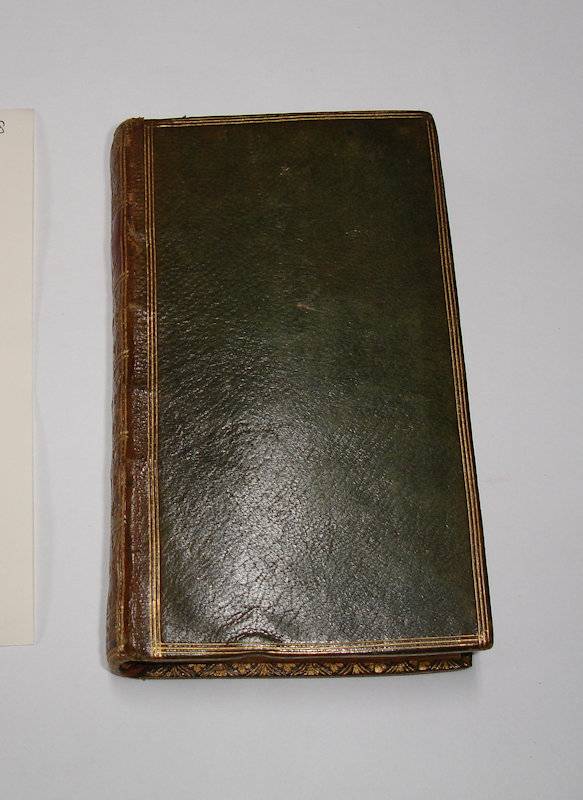 BEZA, MURETUS, JANUS SECUNDUS Theodori Bezae Vezelii Poemata. (Bound with:) Marci Antonii Mureti Juvenilia. (And:) Johannis Secundi Hagiensis Juvenilia. Leiden (Lugduni Batavorum), 1757. 12mo in 8 & 4 sheets. 3 volumes in 1: (IV),IV,124 p., a portrait of Beza; X,106 p., a portrait of Muretus; IV,3-156 p. Green morocco 16 cm (Ref: Brunet 1,239; Graesse cf 1,359, where we find the imprint Paris 1757) (Details: Green morocco; red morocco shield on the back; gilt floral decoration on the back; boards with gilt triple fillet borders; inside dentelles gilt; marbled endpapers; edges of the bookblock gilt; woodcut printers' mark of Joseph Gérard Barbou on all three titles, depicting an old man who stands in the shade of a vine-entwined elmtree. The motto is 'Non solus'. The 2 portraits have been etched by Fiquet) (Condition: Some wear to the extremes. A small bump in the bottom edge of the front board. Two tiny and almost invisible wormholes in the front joint) (Note: All three titles in this book have a false imprint, 'Lugduni Batavorum', i.e. Leiden, in the Dutch Republic. It was according to Brunet actually published in Paris by Barbou. He does not explain, but the printer's mark, paper, printing and layout looks indeed very Barbou. The Short Title Catalogue Netherlands (STCN) is not sure either about Leiden, it adds 'printed in France?' § In Latin elegiac and epigrammatic poetry, from Roman times to the Renaissance, there is constant reference to the 'poetry of youth', as 'standing in contrast to a kind of poetry suitable to be written in old age. The poets characterize the latter poetry as serious, moral, and austere, touching on wars and politics and patriotism. The former is filled with passion and exuberance, concerned not with weighty national issues, but with jokes and laughter and erotic affaires'. (K.M. Summers, 'The Iuvenilia of Marc-Antoine Muret', Columbus, 2006, p. XXV-XXVI) § The first edition of 'poemata juvenilia' of the young Calvinist theologian Theodore de Bèze, or Theodorus Beza, 1519-1605, was published in Paris in 1548. 'It had certain rather free pieces printed, which were afterwards made a matter of bitter reproach against him. He therefore suppresed them in the following editions'. (Ebert) This first edition, including the erotic love poems which Beza later regretted having ever published, was clandestinely reprinted. Beza was considered to be among the best Neo-Latin poets of his time. He is however best known for his Latin translation of the New Testament, his critical Greek edition of the New Testament, and for being the founder of the University of Geneva. § The Frenchman Marc Antoine Muret, latinized as Marcus Antonius Muretus, 1526-1585, 'exemplifies the essence of French Renaissance humanism. A master of Latin and student of Classical Antiquity, he not only engaged in the recovery and exposition of ancient texts, he also actively employed the old genres and skills in the contemporary ecclesiastical and public spheres. He wrote Latin poetry, both sacred and profane, delivered public orations in Latin and lectured in various schools throughout France and Italy on authors as diverse as Catullus and Tacitus and on topics as varied as Greek philosophy and Roman law'. (K.M. Summers, 'The Iuvenilia of Marc-Antoine Muret', Columbus, 2006, p. XIII) His 'Iuveninlia' were first published in 1552. § The Dutch neolatin poet Janus Secundus Nicolai Hagiensis, was born on the 15th of november 1511, the day of the martyr Secundus, in The Hague. He died very young in 1536. In 1528 he moved to Mechelen, the residence of the Austrian vicequeen Margaretha of Parma. The southern part of the Netherlands was in this time the center of a florishing urban civilization. In May 1530 Secundus met a young prostitute from Mechelen, called Julia, and fell in love with her. Julia became the subject of his first book of elegies, his 'Julia Monobiblos', in which he tells how he won and lost his love. During his studies in Bourges under the famous jurist Alciati he wrote his first 'Basia'. Alciati introduced Secundus there also to the newest Italian poetry. A humanist poet often started his career with erotic poetry, like Piccolomini and Beza. Secundus' 'kiss-poems' are a variation on two 'kiss-poems' of the Latin poet Catullus (ca. 84-54 B.C), who became during the Renaissance a model for love-poetry. Secundus wrote in his short life 6835 lines of poetry, of which only 425 lines were printed during his lifetime. He wrote 'with equal fluency all kinds of lyrical, heroic, and elegiac verse. Down to the present day Secundus lives in literary history as the kissing poet' (...) 'Until far in the 18th century Secundus is mentioned as one of the classics of love poetry' (IJsewijn, Companion to Neo-Latin studies I, Leuven, 1990, p. 152) The first edition of his collected works was posthumely published in 1541 in Utrecht, and was edited by Secundus brother Marius. § After the poems of Janus Secundus we find 46 pages with the 'Pancharis Joan. Bonefonii Averni ad Jacobum Guellium (p. 111-156)) (Provenance: On the verso of the front flyleaf: 'John Wordsworth, Edinburgh, 1827'. This is the English classical scholar John Wordsworth, 1805-1839, nephew of the Romantic poet William Wordsworth. 'In October 1824 he entered Trinity College, Cambridge. His university career was distinguished. In 1825 he obtained the Bell scholarship, in 1826 a scholarship at his own college, and was second for the Porson prize; in 1827 he obtained it. In 1828 he proceeded to the B.A. degree, but was disqualified for classical honours through distaste for mathematics. In 1830 he was elected fellow of his college. (...) In 1834 he was appointed a classical lecturer in Trinity College, and undertook to edit Richard Bentley's Correspondence (afterwards completed by his brother Christopher Wordsworth'. (Source Wikipedia)) (Collation: pi4 (plus portrait); A8, B4, C8, D4 etc., K4, L2; Portrait, A8 B4, etc. X8, Y4) (Photographs on request)
Book number: 120208 Euro 280.00