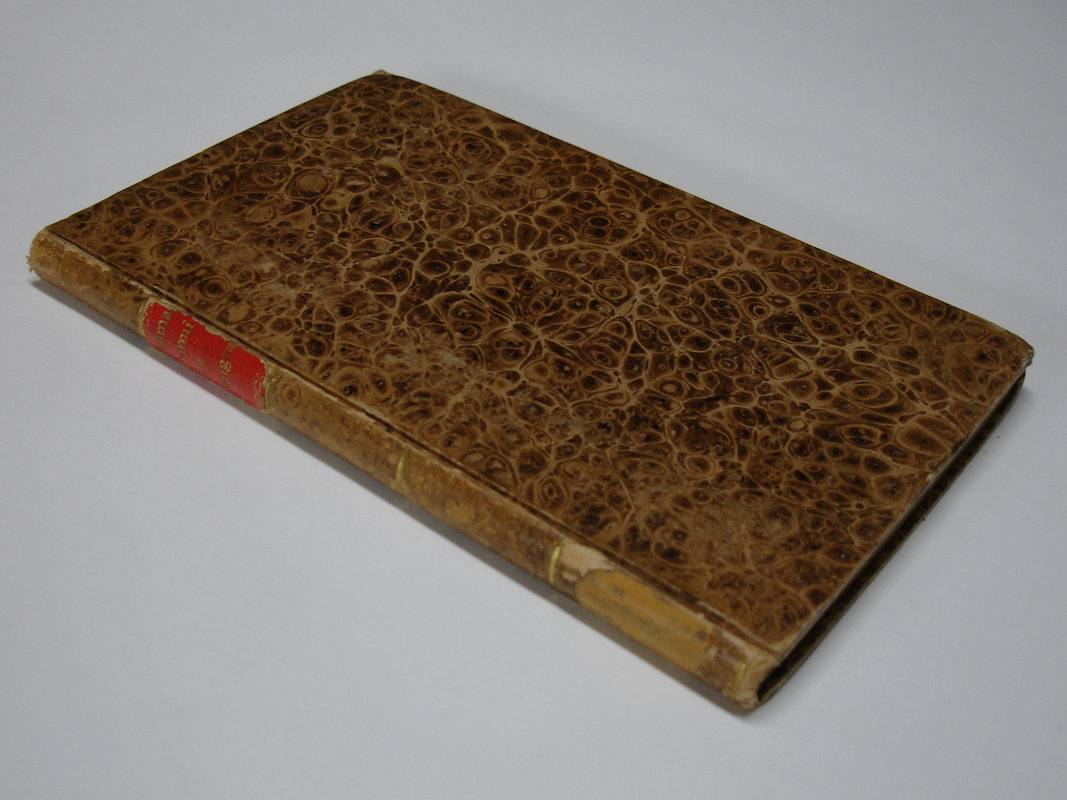 CALLIMACHUS. Callimachi Hymni et Epigrammata. Ex recensione Io. Aug. Ernesti. Curavit Christophorus Fridericus Loesnerus. Leipzig (Lipsiae), Sumptibus Caspari Fritsch, 1774. (Colophon: Lipsiae, Ex officina Breitkopfiorum, 1774) 8vo. (II, portrait of Callimachus), 6,112,(30 index) p. Contemporary boards. 18.5 cm (Ref: VD18 10534695; Hoffmann 1,430; Dibdin 1,371; Moss 1,250; Graesse 2,18; Ebert 3347) (Details: Boards covered with marbled paper. Red shield on the back. Contains a praefatio, Greek text & a translation into Latin, and 6 p. of Variae Lectiones from a manuscript that Ernesti thought worthwile, and an index of 30 pages. Nice portrait of Callimachus, engraved by Sysang, as frontispiece. The German engraver Johann Christoph Sysang, 1703-1757, made this portrait for the Callimachus edition of Leipzig 1741, published by Breitkopf in Leipzig. The copper plate for this portrait was used again in this 1774 edition, which was according to the colophon also printed on the presses of Breitkopf) (Condition: Binding slightly worn at the extremities. Name cut from right upper corner of the front flyleaf. Small stamp on the front flyleaf and the title. Two book labels on the front pastedown. Small stain on back cover. Lower part of spine chafed) (Note: The Greek poet and scholar Callimachus of Cyrene, c. 305 - c. 240 B.C. who is one of the most important authors of later antiquity, was given employment at the famous Alexandrian library. He produced there the first scientific literary history. 'It is clear that Callimachus was a poet of great originality and extraordinary refinement. His amazing productivity (...) was accompanied by bold experimentation in his poetry, and a great versatility of style. The scholarly element, it is true, often adds a frigidity to his verse, but the lively personal and realistic touches which appear, never allow his writings to degenerate into arid selections of obsure myths'. (OCD 2nd ed. p. 195/6) The greater part of his works was already lost in late antiquity. The editio princeps of his surviving works, Hymns and epigrams, was published by J. Laskaris in 1495 in Florence. The first critical edition of the fragments (400) was made by Bentley (1697). With the discovery of 56 papyri the total rose to almost 900 fragments. (Neue Pauly, 6,188/194) § Dibdin observes concerning this 1774 edition: 'This is a useful compendium of Ernesti's edition (of 1761), exhibiting his text without the notes, and accompanied by an index of the more difficult words, and some various readings from a certain manuscript not before collated'. The Callimachus edition of Ernesti, to which Dibdin refers, was published in Leiden in 1761. § Johann August Ernesti, 1707-1781, was a German classical scholar, professor of classics at the University of Leipzig since 1742. As an editor of the Greek classics, Ernesti lagged far behind the Dutch professor of Greek Tiberius Hemsterhuis, the best Greek scholar of his time, and his pupils Lodewijk Caspar Valckenaer and David Ruhnken. The best parts of Ernesti's Callimachus of 1761 are the many corrections, and grammatical and critical observations of Hemsterhuis and Ruhnken. Ernesti not only proved with his edition of Callimachus that he was a mediocre Greek scholar, but also a measly scholar. The following account tells the story of this Callimachus edition. 'The following is the history of this publication given by Wyttenbach in Vita Ruhnkenii, p. 79. A design of reprinting the edition of Graevius (Utrecht 1697) being entertained by the Leyden booksellers (Luchtmans), Ruhnken was induced by his regard and partiality for Ernesti, with whom he had been acquainted at Wittenberg, to suggest to him a full and complete edition of Callimachus, as an undertaking for which he was qualified, at the same time offering him the assistance of the three most learned Grecians then in existence, Hemsterhuis, Valckenaer, and himself. It is to be remarked that he had already, in his second 'Epistola Critica' addressed to Ernesti and published in 1751, given a large and important collection of notes on Callimachus. Ernesti undertook the task, and soon after sent for the inspection of his friend at Leyden, the notes which he proposed to insert. Both Ruhnken and Hemsterhuis were surprised and disappointed at finding them poor and meagre; they were therefore returned to Ernesti, with the exhortation to improve and render them more worthy of an new edition; and the sources were pointed out, from which he might draw the requisite information. At the same time he was again advised to apply for the assistance of Valckenaer, who had accumulated valuable materials for explaining and emending the fragments. Accordingly the notes received additions and improvements, but not a word from Valckenaer, whose assistance Ernesti would not ask, for fear his own notes might be obscured by the superior merit of those of his coadjutors. The truth of this account, so little creditable to Ernesti, has been of late disputed; nor are we able to corroborate it; but from the examination of the book itself, we certainly suspect that the editor was fearful of enriching the work with those things which would have added to its intrinsic value, but would have eclipsed his own share of the performance'. ('Museum criticum or, Cambridge classical researches', volume II, Cambridge 1826, p. 151) (Provenance: Four Jesuit provenances: Book label on the front pastedown: 'Biblioth. dom Prob. Monast. Soc. Jesu.' § Two small stamps on the front flyleaf: 'Ad us. Stud. Prov. Neerl. S.J., Litt. Class.', and a round stamp: 'Biblioth. Rhetor. Provinc. German. S.J.' § On the verso of the title an oval stamp: 'Bibl. Dom. S. Bonifatii 's Heerenberg I.H.S.' § On the front pastedown also the bookplate: 'Graf von Galen'sche Bibliothek'. To whom of the Von Galen family, of old Westphalian nobility, this book once belonged is hard to say. Biographie-portal.eu offers the following candidates: August Aloysius Graf von Galen, 1866-1912, Landrat. Clemens Graf von Galen, 1878-1946, Kardinal; Bischof von Münster. Ferdinand Graf von Galen, 1831-1906, Zentrumspolitiker, Fideikommißherr. Franz Graf von Galen, 1879-1960, Politiker; Mitglied des preußischen Landtags. Friedrich Graf von Galen, 1865-1918, Politiker. Maximilian Graf von Galen, 1832-1908, Weihbischof von Münster) (Collation: pi1, *4 (minus leaf *4); A-H8, I-K4 (leaf 4 blank)) (Photographs on request)
Book number: 120332 Euro 110.00