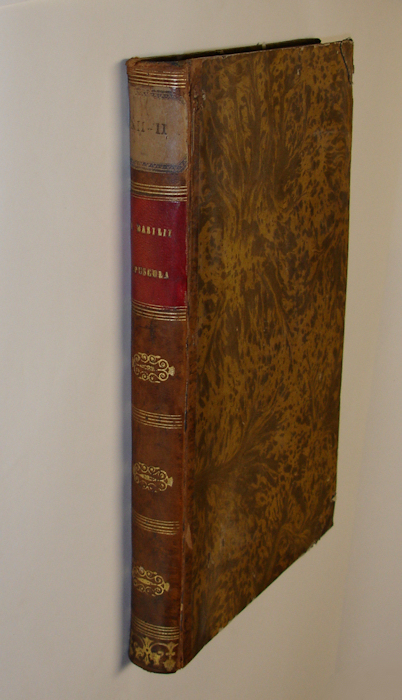 BASILIUS MAGNUS. Basilii Magni Caesariensium in Cappadocia Antistitis sanctissimi Opera plane divina, variis e locis sedulo collecta & accuratione ac impensis Iodoci Badii Ascensii recognita & coimpressa, quorum Index proxima pandetur charta. (Paris), Prelum Ascensii), 1520. (At the end: 'Impressa sum impensis & recognitione Iodoci Ascensii ad Idus Novemb. Anni Dominici 1520') Folio. (X),178 leaves. 19th century half calf. 30 cm (Ref: BP16_104596; Hoffman 1,412; Renouard 2,145/6; Moreau 1511-1520: 2246; Graesse 1,306; USTC no: 145192) (Details: Back gilt, with a red morocco letterpiece. Marbled paper on the boards. The architectural border on the title-page, filled with fable animals, encompasses the printer's device of Josse Badius (Jodocus Badius or Josse Bade), which features a printing press. A sign reads: 'Prelum Ascensianum', or 'Press of Asse', since Badius was from the Flemish village of Asse; on the press the date 1520. (BATYR, Base de Typographie de la Renaissance, n° 27498); the date, 1520, is repeated in the colophon on the last page. Woodcut initials) (Condition: Binding worn at the extremities. Front joint starting to crack. Old ownership inscription on the title. Paper of the right & left lower corner of the title page skillfully restored. Occasional old ink marginalia. Margins of 8 leaves have been repaired skillfully. Two small, not irritating wormholes in the preliminary leaves. The last page is skillfully mounted. The 2 leaves with the 'epistola nuncupatoria' by J. Argyropulus, have erroneously been bound between leaf II & III) (Note: Basilius Magnus, bishop of Caesarea, also known as Saint Basil the Great, 329/30-379 AD, certainly was one of the most brilliant ecclesiastical orators of antiquity, combining 'rhetorical skill with simplicity of thought and clarity of expression'. (J. Quasten, 'Patrology', vol. 3, Utrecht 1963, p. 216) The editio princeps of the Greek text of his 'Opera' was published in Basel in 1532. A Latin translation of only a part of Basil's works, made by the Italian humanist and theologian Raphael Volaterranus (Raffaello Maffei) had been published earlier in Rome in 1515. Our book on offer is a second augmented edition of Basil's works in Latin. They were edited by the French humanist scholar Jacobus Faber Stapulensis (Jacques Lefèvre d'Étaples), ca. 1455-1536, who is best known for his important translation of the New Testament into French. In the short preface the Parisian printer Badius Ascensius explains that Faber Stapulensis had sent him for publication Latin translations of (other not yet published) texts of Basil, 'Basilii vere Magni, monumenta aeterna cedro dignissima'. (Leaf A1 verso) The collection opens with the 'Hexaemeron', i.e nine homilies on the six days of Creation in the opening chapters of the first book of the Bible, book Genesis. (Leaves 1/26) 'There is no work in late Greek literature which could be compared with these homilies in rhetorical beauty'. (Quasten p. 216/17) They were translated by Johannes Argyropilus (or Argyropoulos), a Greek scholar who had fled to Italy after the fall of Constantinople in 1453. Next come the first 5 books of 'Adversus Eunomium', the oldest of Basil's dogmatics writings, in which he refutes theses of the heretic Arians, maintaining a difference in essences between the Father, the Son and the Holy Spirit. Eunomius was the leader of a sect that adhered to an extreme form of Arianism. They believed that Jesus Christ was not of the same nature as God the Father. (Leaves 27/55) These texts were translated by the Byzantine émigré scholar Georgius Trapezontius. The leaves 55 verso/159 contain a reissue of the Latin translation of 1515 made by Raphael Volaterranus, opening with the 'Monodia Gregorii Nazianzeni in Magnum Basilium'. They also include about 18 homilies on the Psalms. The last part (leaves 159/178) contains Basil's 'Regula' in the Latin translation of the Gaulish monk Rufinus Aquileiensis, 344-411. The 'Regula' discusses the principles of monastic life, arranged in the form of question and answer) (Provenance: Written on the title: 'Ex libris Missionnariorum a Sto Spiritu'. Ownership entry of one 'De la Bournée' in lower margin) (Collation: A10 (leaves A9 & A10 erroneously bound after A2); A-X8, Y6, Z4 (leaf Z4 verso blank)) (Photographs on request)(Heavy book, may require extra shipping costs)
Book number: 088152 Euro 1500.00