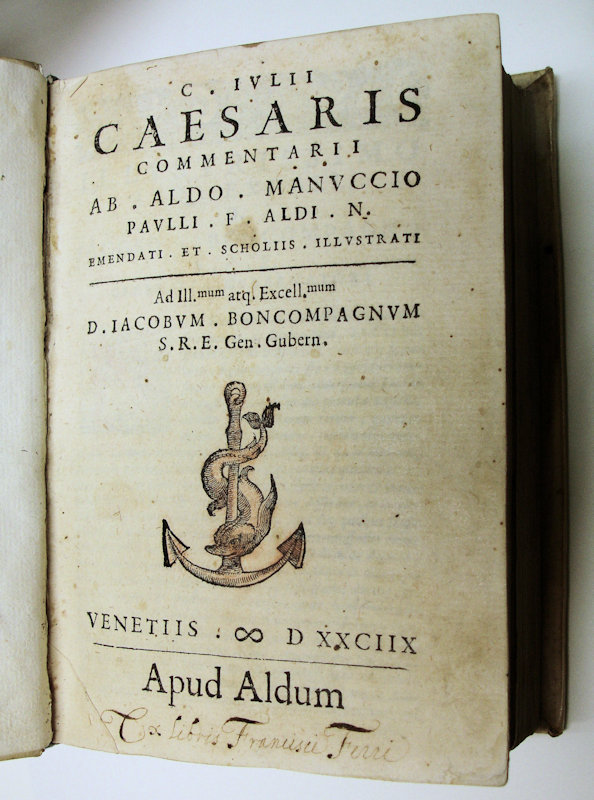 CAESAR. C. Iulii Caesaris Commentarii, ab Aldo Manuccio Paulli F. Aldi N. emendati et scholiis illustrati. Ad Ill.mum atq. Excell.mum D. Iacobum Boncompagnum S.R.E. Gen. Gubern. Venice (Venetiis), Apud Aldum, 1588. 8vo. (CXL),596,(164)(47),(1 blank) p., 7 full page woodcut illustrations, 13 woodcut illustrations in the text; 2 folding maps. 18th century vellum. 15.5 cm (Ref: Schweiger 2,44; Ebert 3267; Graesse 2,6; Brunet 1,1454; Renouard p. 240: a reissue with some alterations in the disposition of the Aldus-edition of 1575, cf Renouard p. 221) (Details: Two thongs laced through the joints. Gilt letterpiece of calf on the spine. Woodcut printer's mark on the title. Woodcut initials. Folding maps of Hispania and of Gallia. On the last 3 leaves a stocklist of Aldus: 'Libri de Stampa d'Aldo, che si trovano al presente') (Condition: Anchor and dolphin of the printer's mark are vaguely handcoloured brownish; Name at the bottom of the title. Ownership entry on front & rear pastedown. Small wormhole in the blank outer margin of the last leaf, slightly affecting also the last but one leaf) (Note: This Caesar edition was produced by the grandson of the famous Venetian humanistic scholar and printer Aldus Manutius, the founder of the Aldine Press. He was the son of Paullus Manutius, and the last member of that printers' dynasty. He died without heir in 1597. This Caesar edition is a reissue of those previously published in 1575 and 1559 by his father Paullus Manutius. Aldus Manutius the Younger added a commentary of his own. The 140 preliminary pages of this Caesar edition contain the preface to the Aldus edition of 1575 and of 1559; further a treatise of Johannes Jocundus (Jucundus) on animals and some defence devices; a treatise of Io. Buteo and of Leo Bapt. Albertus on the building of wooden bridges; a list of peoples, kings, towns and rivers in Gaul; a collection of testimonia on Caesar in the work of Cicero, collected by Fulvius Orsinus; fragments of several works of Caesar; the report on Caesar by the late antique historian Eutropius. At the end, after the text of Caesar, we find an alphabetic list of Gallic places, peoples, rivers and montains, compiled from the work of Caesar and Tacitus by Raymundus Marlianus; then ca. 70 pages commentary (called scholia) of Aldus Manutius the Younger) (Provenance: On the title the elegant 18th century (?) note: 'Ex libris Francisci Ferri'. There are several candidates for Franciscus Ferrus, or Francesco Ferri. On the front pastedown and the pastedown in the rear: 'Ex libris familiae Rossi, 1824'. There are quite a number of Rossi families in Italy. See e.g. Wikipedia 'Rossi, familia)) (Collation: A-H8, 2 folding maps, A-2O8, 2P2; 2a-2i8, 2k10; *-3*8 (leaf 3*8 verso blank) (Photographs on request)
Book number: 120030 Euro 1000.00